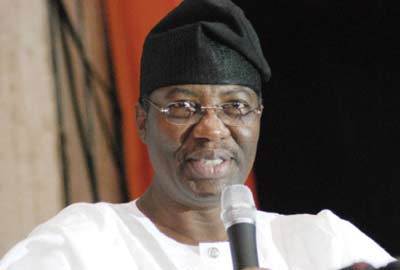 Former governor of Ogun State, Otunba Gbenga Daniel has pleaded with the clergymen not to leave the affairs of Nigeria in the hands of politicians alone but to support them with prayer.

Daniel stated this while speaking as the chairman of the occasion at the 10th Colloquium organised to celebrate the 70th birthday of the Primate of Church of the Lord Worldwide, the Most Rev.Dr. Rufus Okikiola Ositelu, in Lagos.

Speaking at the event with the theme: “A Nation at War with Herself: The Panacea for Genuine Peace”, Daniel said there was no state in the country that is not blessed with natural resources but the abundant natural resources were not solution to the challenges facing the country.

The former Ogun governor said what country currently needs is divine intervention which could be got through frequent prayers to God by clergymen.

He pleaded with the clergymen in the country not to leave the affair of Nigeria in the hands of politicians alone but to support them with prayers in order to succeed.

Osiyemi said the government would continue to identify with the church in solving the multifarious problems of the society.

A former presidential spokesman, Dr. Doyin Okupe said the ultimate solution to Nigeria’s problems lie in the word of God.

He said the Bible has all the answers to man’s woes.

The celebrant in his welcome address, reiterated the needs for Nigeria to embrace good governance and become a true fiscal federation where regions/zones will compete to excel, and driven by a sense of patriotism and shared values of truthfulness, honesty, duty-conscious and others.

Ositelu said: “We cannot continue to live in denial. Nigeria is a plural society with multiple ethnicities, languages and religions, and should be run in accordance with the basic tenets of federalism.

“Anything to the contrary is absurd and a waste of time; and sows the seed of mutual distrust and anarchy. The Nigerian state today appears to be an aberration within the universal understanding of the principle and practice of federalism.

“What we need is unity in diversity and a new Constitution, which is reflective of our diversity and federal in nature. Fiscal federalism is the answer to most of the woes confronting Nigeria.”

He described the national assembly’s attempt to review the Constitution as “mere cosmetic tinkering with the present corrupt system. The expectation of the majority of Nigerians is that the on-going review of the Constitution would avail the country the opportunity to make a fundamental statement on restructuring and restoration of the federal principle, and thus redefine the interrelationship between the components units to make the political system work more efficiently and effectively.”