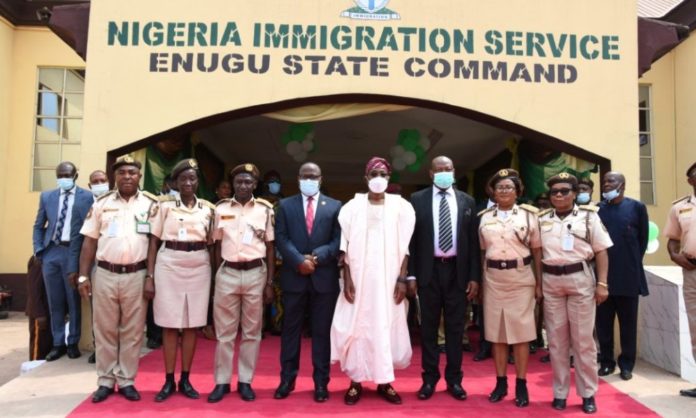 The Nigeria Immigration Service (NIS) has launched an enhanced electronic passport facility for the South East.

“It is so easy to apply online. Applicants will only be required to go to the selected Passport Office on the appointment date for enrolment”, he said.

The minister noted that this would eliminate passport racketeering, touting and clumsy processes.

He urged applicants to visit the NIS Passport portal via passport.immigration.gov.ng to apply, complete the form, pay online and get an appointment.

Aregbesola advised them to have their National Identity Number (NIN) and be ready to supply verifiable documents for easy processing of their applications.

The data page is polycarbonate, water-resistant and has additional 25 security features more than the ordinary e-Passport.

“With the commissioning of the Production Centre in Enugu, all the five Passport Offices in the South-East have been migrated to the enhanced Passport platform”, he said.

The CGI told holders of the ordinary e-Passport not to worry as the two documents are valid and run concurrently.

Enugu Governor, Ifeanyi Ugwuanyi represented by Secretary to the State Government, Prof. Simeon Otuanya thanked the NIS for its contributions to the nation’s security.

In December 2021, the enhanced e-Passport facility for the South-West was launched in Ibadan, Oyo State.