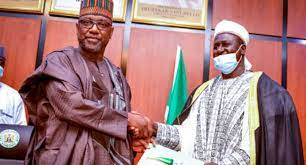 Niger House of Assembly has confirmed the appointment of Alhaji Abubakar Kigera as the substantive Grand Kadi of the state Sharia Court of Appeal.

The News Agency of Nigeria (NAN) reports that the new grand khadi was confirmed after being screened by the lawmakers at the plenary in Minna on Wednesday.

During the screening process, the lawmakers advised the new grand khadi to bring in new ideas, innovations and his wealth of experience to the judicial sector to move the state forward.

Responding, Kigera pledged to do his best by carrying everybody along in the discharge of his duties and ensure that justice prevailed in the judicial sector.

NAN reports that Kigera, who was born on Sept. 3, 1970 in Borgu Local Government Area, obtained a Bachelor of Art degree in Law from Ahmadu Bello University, Zaria.