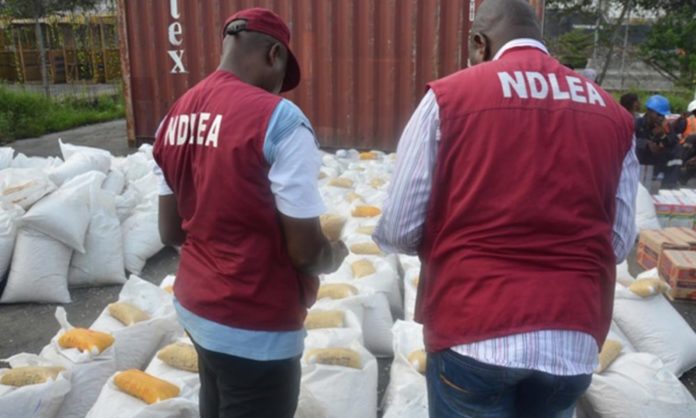 The National Drugs Law Enforcement Agent(NDLEA) on Sunday in Abuja said it has intercepted 1.5 million tablets of Tramadol en route Kebbi and Kano as well as other drugs at the Lagos airport and seaport.

The agency said it also ceased cash, arms, ammunition and 137.754kg of narcotics across 7 states.

Director, Media & Advocacy NDLEA Headquarters, Abuja, Femi Babafemi in a statement on Sunday, said its operatives have also ceased one N1, 413,344 alongside some arms and ammunition from a suspected bandit and a drug kingpin in Plateau state while over 137.754kgs of assorted illicit drugs were recovered during interdiction operations across seven states in the past week.

He said its operatives in Edo State on Friday 14th January 2022, intercepted psychotropic substances concealed under legitimate goods in a trailer coming from Onitsha and going to Yauri in Kebbi State.

“The driver of the truck, Bashir Lawali, 30, was arrested along with Abubakar Sani, 30, and Ali Abubakar, 19, while the exhibits in Kano were seized from one Sa’idu Yahya, 31.

He also, disclosed that attempts by drug traffickers to export 73 parcels of cannabis (34.05kg) concealed in foodstuff plastic containers to the United Kingdom through the NAHCO export shed of the Murtala Mohammed International Airport, MMIA, Ikeja Lagos were frustrated by operatives on January 8, 2022, adding that, another 50 parcels of cannabis consignment (27.25kg) meant for the United States were also intercepted at the export shed of the airport on Tuesday 11th Jan while three suspects were arrested.

He added that illicit drug merchants, while trying to bring into Nigeria 94 parcels of cannabis indica (Colorado) weighing 43.4kg through the Tincan seaport in Lagos were arrested on 13th January when operatives intercepted the drug inside a 40ft container from Canada.

He said the exhibit was concealed inside a Toyota Camry car. This came on the heels of a similar seizure on 11th Jan. of 59 parcels of Colorado (17.3kg) concealed in a Mercedes Benz vehicle imported from Canada.

“In Plateau State, a fake security agent, Babagana Maaji was arrested through a controlled delivery of 5.6kg cannabis from Lagos.

“The suspect based in Damaturu, Yobe State, was nabbed following the interception of a commercial bus bringing the consignment from Lagos to Gombe in Mararaban Jos on 8th Jan.

“On Tuesday 11th Jan, operatives of the Plateau Command of the Agency also arrested a suspected bandit, Abdullahi Usman Ahmad, 28, at Hwolshe with One Beretta pistol; seven rounds of live ammunition; two empty shells; 12 grams of cannabis sativa; a pair of handcuffs and N1, 136,344), suspected to be ransom money as well as an Opel car with registration number ZAR35LQ.”