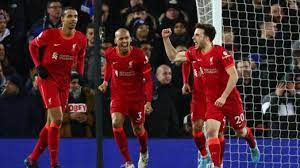 After Manchester City’s 2-0 win over Brentford on Wednesday extended their advantage at the top to 12 points, second-placed Liverpool needed to issue a response.

They edged in front in the first half at Anfield, thanks to Jota’s close-range finish.

Mohamed Salah came off the bench to a rapturous applause to make his first appearance since returning from the 2021 Africa Cup of Nations (AFCON).

The Egyptian striker curled a sumptuous effort against the post as Liverpool pressed for a second.

That second did not look like it was going to come as chances continued to come and go.

The win moved Liverpool onto 51 points from 23 games, with leaders Manchester City having played one game more.

Leicester City’s poor season continued as they remain languishing down in 12th in the standings.(Reuters/NAN)