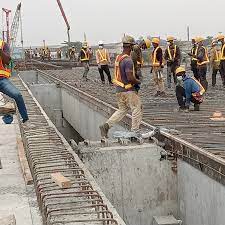 Lagos State Governor Babajide Sanwo-Olu has assured Lagosians that the Okokomaiko end of the Lagos/Badagry Expressway and Iyana-Iba bridge will be completed before the end of the year.

He gave the assurance yesterday when he opened the Primary Healthcare Center in Amuwo-Odofin Local Government Area. The facility is named after Senator Oluremi Tinubu.

Governor Sanwo-Olu, who was accompanied by Deputy Governor Obafemi Hamzat and members of the State Executive Council, described the project as a modest achievement entrenched in the THEMES agenda.

He urged the people in the Amuwo-Odofin and Oriade LCDA to continue in peace, get their Permanent Voter’s card (PVC), and cooperate with the government so progress in their areas can ride to enviable heights.

Council Chairman Valentine Buraimoh said the vision for the facility came to be when he saw the human traffic seeking medical attention at the existing healthcentre in there council secretariat.

“The PHC is named after Senator Oluremi Tinubu in recognition of her exemplary passionate contributions to child development and her several child-oriented programmes and initiatives from her time as Lagos State first lady.”