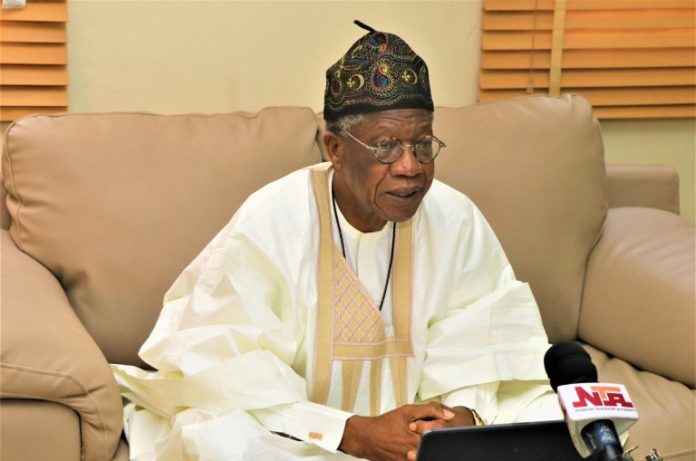 A faction of All Progressives Congress (APC) in Kwara State loyal to Minister of Information and Culture, Alhaji Lai Mohammed, organised special prayers in Ilorin for the God’s intervention to save the party from implosion in the state and other states being affected by the crises.

The faction said that, the prayers became imperative in view of the alleged disenfranchisement and maltreatment meted out to some of their leaders and members shortly after the electoral victory of the APC in 2019 general election and subsequent taken sides of the national caretaker committee of the party on the issues.

The event which was held at the field of Lower Niger Basin Authority, Ilorin, was attended by the leaders, women and youths of the party across the 16 local government councils of the state.

At the prayer session, a Muslim cleric, Alhaji Shuaib Cisse and a Christian cleric, Rev. Gabriel Olatoye prayed to God to give President Muhammadu Buhari as the national leader of the party to have a good wisdom that can be deployed to rescue the parry from being collapsed.

The clerics also used the occasion to pray for President Muhammadu Buhari in choosing the right and credible person as his successor in 2023.

However, speaking at the event, all youths, ward and local government chairmen in the state expressed deep concern over the insensitivity and uncared attitude of the national caretaker committee of the party towards the current situation in the state chapter of the party.

They however said that, if the situation is not addressed, it may have a serious effect on the electoral victory of the party in the state in the next elections

Representatives of the ward, local government chairmen and youths Abdulrasheed Abdulrauf, Muyideen Shittu and Yinka Raji made the submissions in Ilorin, the state capital at a prayer session for the party ahead of 2023.

The stakeholders added that the war of attrition rocking the party is also capable of leading to mass defection of members to other parties in the state.

They therefore urged the leadership of APC in the state and Abuja to urgently intervene and salvage the situation.

Speaking on behalf of the ward chairmen, Abdulrauf said that “ I am delighted to present to you our elders and critical stakeholders our position, after carefully studying the situations in our party.

‘We observe that since our party won the 2019 general elections in the state,there has been no peace in the party, following the desire of Govenor Abdulrahman Abdulrazaq to divide the party, which he successfully achieved by forming and funding a group called ‘AA”.

‘This, we believe, was not in the best interest of the party and not in line with the party’s constitution.

‘We have lodged complaints several times with our various Local government party Chairmen, our senatorial chairmen as well as taking the complaints to the state chairman of the party against this illegality by the governor who is supposed to be the leader of the party.

‘Despite our complaints, nothing has changed in the last 3 years. Therefore, we, the entire ward chairmen of the party in the state have met and resolved to call on the state chairman and our leaders to note that our teeming members and supporters at the grassroots are becoming restless, more so when election year is fast approaching.

‘In conclusion, the house is falling and we hereby appeal to our local government and state leadership to take urgent measures to retain our members at the grassroots, otherwise, the horse will bolt out of the stable.’

Corroborating the above, Mr. Shittu said that all the 16 local government chairmen ‘hereby acknowledge that the complaints lodged by the ward chairmen were not limited to their level alone, we chairmen also suffer the same fate at our different local levels and we also registered same complaints with the state chairman without results so far.’

Speaking for the youths, Mr. Raji said that ‘the youths have found ourselves in the state since our party’s victory at the last general elections.

‘Apart from the fact that we are not adequately carried along by the government run by our party, the governor has been busy dividing the party and giving preference to mediocrity over and above merit both in the party and government.’

Responding, the factional Chairman, Hon Bashir Bolarinwa, assured of transmitting their grievances to the right quarters.

‘We will take all your complaints to their doorsteps. We hope this time around they will listen to us.I have the feelings and I pray for them that Almighty God will open their eyes and make them to realise that those of us in the APC loyal are the true members of the party in the state,’ he said.

‘If APC must make any meaningful impact in the state, then Abuja must listen to our pleas. They must look into our matter and they must do something positive.’

‘I hope they will listen, because I am confident that definitely they will not want to lose us,’ he added.

‘I want to appeal to all of us once again and I want to tell us that by the grace of God we will have cause to laugh at the end of the day.

‘Secondly, we have also prayed for President Muhammadu Buhari as the leader of our party as well as the number one man in Nigeria. There is no way our party can be talking of a successor without his important input. We asked God to guide and give him the required wisdom to be able lead the party in choosing a good successor that will keep the flag of the party flying.’