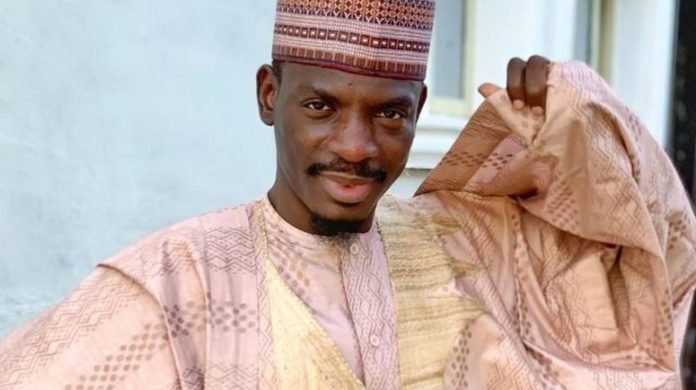 Nigerians on social media have berated a presidential aide, Bashir Ahmad, for mocking the continued detention of Yoruba Nation agitator, Sunday Adeyemo also known as Sunday Igboho, who has been remanded in a prison in the neighbouring Benin Republic since July 19, 2021.

Ahmad, who is the Personal Assistant to the President on Digital and New Media, took to his verified Facebook page on Saturday evening and shared a story published by .

Reacting, Ahmad shared the story with a snide comment, “Hilarious!”

Scores of his followers have since flooded his comment section with criticisms.

had earlier reported that the Department of State Services raided Igboho’s residence around 1am on July 1, 2021 before he was arrested in Cotonou, Benin Republic on July 19, 2021.

The secret police had said it killed two of his associates and arrested about 12 others during the bloody raid.

Igboho, who narrowly escaped the bloody raid, was subsequently declared wanted for allegedly stockpiling arms to destabilise Nigeria under the pretext of Yoruba Nation, an allegation he denied.

After about three weeks in hiding in Nigeria, Igboho found his way to Benin Republic but luck ran out on him and he was arrested around 8pm on July 19, 2021 by the Interpol at the Cadjèhoun Airport in Cotonou.

Igboho was arrested after the Federal Government notified its West African neighbours — including Republic of Benin- that he should be captured.

Igboho was arrested in Cotonou when he tried boarding a flight to Germany after the Nigerian government notified Interpol.

He was arrested with his wife, Ropo, but the Cour De’appal De Cotonou ordered the release of the Germany-based wife of the activist, saying there were no allegations against her.

The Beninese court, however, ordered that Igboho be in prison custody in the country while further investigations would be carried out on the case against him.

Igboho, who is now seeking asylum in Benin Republic, is facing allegations bordering on trafficking in arms, inciting violence and causing disunity in Nigeria.

Some of the other offences said to have been committed by the activist bordered on entering the Benin Republic illegally and alleged planned intent to cause social unrest in the Republic of Benin.

Though currently in detention, the court granted the 48-year-old agitator access to medical care while his lawyers continue to battle for his release and kick against his extradition to Nigeria.

Asked recently whether the Office of the Attorney General of the Federation, Abubakar Malami (SAN), had abandoned the extradition of Igboho or otherwise, Malami’s Special Assistant on Media and Public Relations, Umar Gwandu, had told

that he could not make the “processes” known to the public.

“There are certain things that may not require publicity but the important thing is having a peaceful Nigeria and not discussing all or making public some of the processes so far,” Gwandu had said.