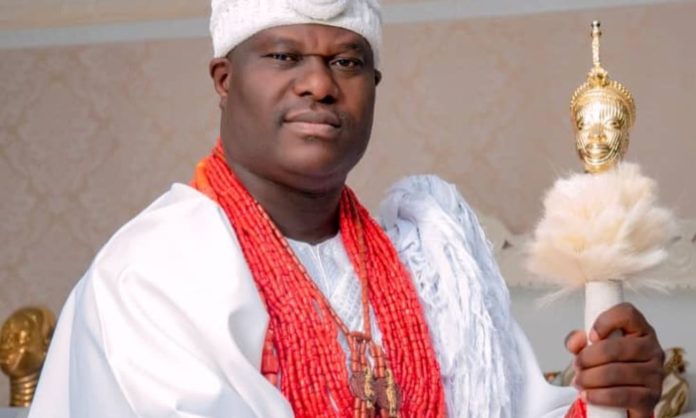 The Ooni of Ife, Oba Adeyeye Ogunwusi has dismissed reports linking the killings of five farmers in Toronto village of Osun to the long-resolved Ife/Modakeke dispute.

Recall that, there was palpable tension among residents of Ile-Ife and Modakeke of Osun State on Friday, following the killing of five farmers from Modakeke along Toro Road in the early hours of the day.

Reacting on Saturday evening, Comrade Moses Olafare, Director Media and Public Affairs, Ooni’s Palace said, while some mischief makers tried to link the criminality to the long-resolved Ife/Modakeke dispute, the Palace of Ife wishes to state unequivocally that what happened at Toro village was sheer criminality and the long hand of the law will soon catch up with the perpetrators.

The statement while condemning the unfortunate incident in strong terms, said the Palace of the Ooni immediately reported the case to appropriate security authorities, who swung into action immediately.

“It is in the public knowledge that the country like its counterparts across the world is being confronted by security challenges, which would soon be a thing of the past with the corporation of all especially we (citizens),” The statement said

It said, attempts to add communal colouration to the crime with an attempt to distract security operatives from unveiling the evil minds behind the devilish act by some mischief makers is already known to security operatives who are on top of the matter.

“While lauding government and security operatives including the Police, Department of State Service (DSS), the Nigeria Army, Vigilante groups and others for being responsive to the ugly situation and their immeasurable roles in sustaining the peace being enjoyed in the communities, the Ooni implores all law abiding persons to carry on with their legitimate activities as perpetrators of acts of criminality are not representing any community and will only be treated as criminals,” the statement said