Chief Whip of the Senate,  Dr. Orji Uzor Kalu, has been named the Director General of the Ahmad Lawan Central Campaign Organisation.

Lawan, the Senate President and Chairman of National Assembly, is running for the office of the Nigerian President in the All Progressives Congress (APC).

At a meeting held in Abuja on Thursday, Chairmen of eight Committees of the  Campaign Organisation were equally announced.

The Lawan team led by Kalu, is expected to strengthen the campaign organisation and build a stronger cohesion that would deliver APC ticket to  the Senate President during the presidential primaries,  and ultimately lead him to victory in the general election.

The team met behind closed doors to fine tune strategies and consolidate on the gains made so far.

The Finance and Budget Committee has

Auwal Lawan as chairman and

The Strategy and Planning is headed by Senator Ikechukwu Obiora as Chairman, with Senator Betty Apiafi as Deputy Chairman.

Senator Barau Jibrin as Chairman  and

Th Media and Publicity Committee is headed by Senator Aliyu Sabi Abdullahi as Chairman, with Mr

Security and Intelligence has 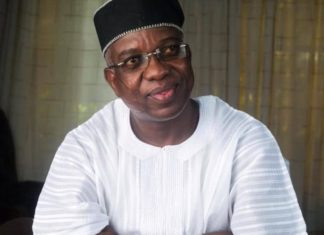