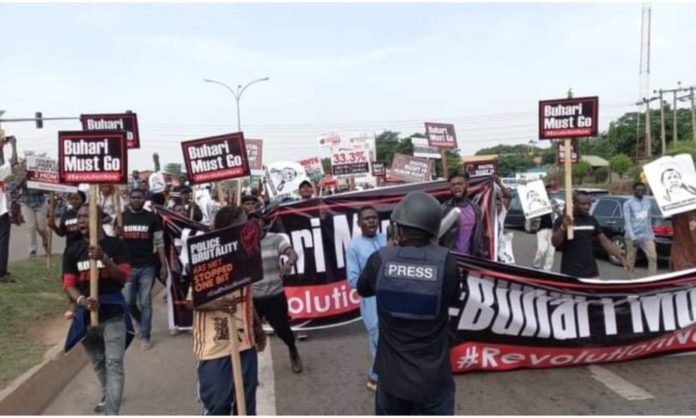 The Nigeria Police Force on Saturday justified its use of teargas on protesters who took to the streets to mark this year’s Democracy Day by voicing their grievances against the present administration.

According to the Police Force Public Relations Officer, Frank Mba, the actions of the police officers are in line with international best practices of dispersing violent protests.

DAILY POST recalls that the police shot teargas at protesters in Abuja and Lagos.

Some Nigerian youths, who stormed the Gudu junction in Abuja on Saturday morning to protest the rising insecurity in Nigeria, clashed with some security personnel.

Several groups and activists had vowed to stage protests in all parts of the country as Nigeria celebrate Democracy Day.

Following the plan, some protesters in the early hours of Saturday blocked roads in the area to decry the current state of the nation.

Reacting to the development, Mba told Channels Television in Abuja, “We had an isolated case in Abuja where some of the protesters became unruly and in line with international best practices, police fired teargas at them.

“And that’s an acceptable mode of engaging violent protesters anywhere in the world, whether it’s in Abuja, Lagos, Paris, London, or New York or California. That is internationally accepted.

“We would have problems if we had fired live bullets at them, but when you fire teargas at protesters to disperse them, you aren’t in breach of any known code, either nationally or internationally.

“I also want to use this opportunity to state clearly that no citizen, either in Lagos, Abuja, Port Harcourt, Kano or anywhere, is currently in detention as a result of this isolated incident.

“When you protest in contravention of this set of conditions I’ve given, clearly you are coming in direct conflict with the laws of the land, and the police will never stand by idly and watch you create problems for the entire polity.”

Meanwhile, the FCT Police Command said it successfully dispersed members of the proscribed Islamic Movement of Nigeria (IMN)-Shiites and other groups from taking advantage of the June 12 Democracy Day to embark on protest in the nation’s capital.