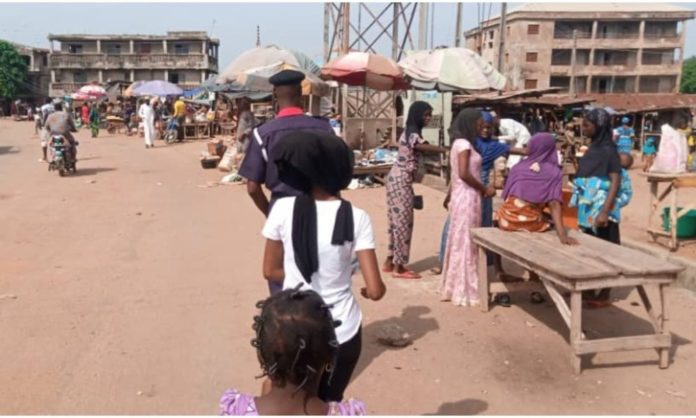 The Democracy Day celebration on Saturday, June 12, has been peaceful in Ilorin, Kwara State capital.

DAILY POST reports that although security forces comprising soldiers, DSS, Police and members of the Nigerian Security and Civil Defence Corps (NSCDC) manned strategic locations in the state capital, no major incidents were reported as witnessed in some parts of the country.

To complement efforts of other security agencies before, during and after the event, the state command of the NSCDC mobilized over 800 personnel ahead of the June 12 anniversary, according to its spokesman, Babawale Zaid Afolabi in Ilorin.

He said, “NSCDC, is also collaborating with other security agencies to secure security of lives and property on the heels of planned nationwide protest of agitators.”

Residents went about their lawful endeavours in Ilorin devoid of fear as commercial transporters operated without any hindrance.

Some shops did not open for business in the early part of the day, but others were observed transacting business with caution.

Reports from Lafiagi, Owu-Isin, Alapa, Oke-Oyi, Igbaja and Offa, among major towns of the state indicated that the June 12 anniversary was peaceful with people going about their lawful socioeconomic lives contrary to the fear entertained by residents of the state.

Protests were not carried out in all the towns mentioned according to statewide intelligence reports received by DAILY POST.

Our correspondent also reports that the National Association of Nigerian Students (NANS), Kwara State branch, kept its promise not to participate in the planned nationwide protest for Saturday.

He said ” The decision of the students was laudable as it has taken the sail off the winds of any fifth columnists who may want to hijack the peaceful protest for their own agenda.”

Governor Abdulrazaq, made the commendation when he received a delegation of the state chapter of the students body who presented an award to him on Friday, for his commitments to public good, human capital and infrastructural development in the state.