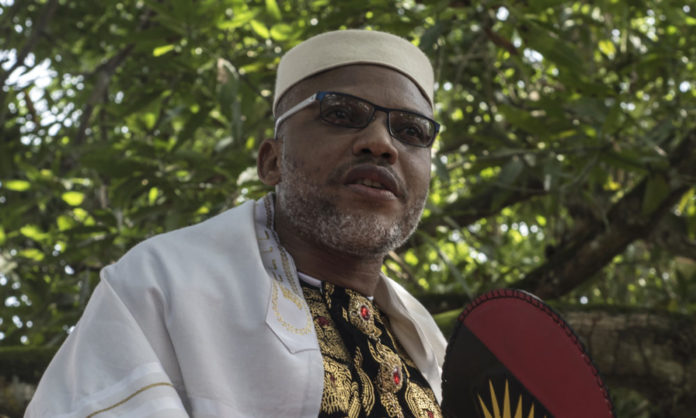 The Abuja division of the Federal High Court, yesterday, brought down the trial of the detained leader of the proscribed Indigenous People of Biafran IPOB Nnamdi Kanu from January 19 to 18 next year.

The development followed the abridgment of time granted by the Judge against the backdrop of a passionate plea to that effect.

The court also ordered the Department of State Service (DSS) to allow Kanu, who was not produced in court, to practice his faith, change his clothes and be given maximum comfort in detention.

Kanu’s lawyer, Ifeanyi Ejiofor, had approached the court with an application seeking an order to accommodate the trial in November and December tas against the earlier January 19.

Shuaib Labaran, who stood for the Federal Government, however, told the court that a counter affidavit opposing the request had been filed and served on Kanu.

Justice Nyako, however, informed Kanu’s lawyer that the application for time abridgment cannot be considered because there was no judicial time for such an issue.

In the drama that ensued, the case diary of the court was read to the lawyer to establish the court has crowded cases to attend to.

However following the insistence, Justice Nyako agreed to shift other cases slated for January 18 to accommodate the trial which will last till January 19 and 20. Kanu’s application filed by his team of lawyers led by Mr. Ejiofor, is asking the court to acquit and discharge him of all counts in the charge. He argued that the court lacks the requisite jurisdiction to try him on the basis of a charge he said was grossly incompetent. The IPOB leader contended that there was no proof of evidence attached to the amended charge against him.

“That no allegation was made in any of the counts of the amended charge that the alleged sundry acts of the Defendant/Applicant were physically carried out by him, within the geographical space or territorial boundaries of Nigeria.

“That the only element requisite to constitute and found liability for incitement is the actual words allegedly uttered by the Defendant/Applicant” Kanu said.

The Federal Government had on October 21 re-arraigned Kanu on a seven-count amended charge.FG, in the amended charge marked FHC/ABJ/CR/383/2015, alleged that Kanu had in furtherance of an act of terrorism, issued a deadly threat that anyone that flouted his sit-at-home order should write his or her will.

It alleged that as a result of Kanu’s directive, banks, schools, markets, shopping malls, fuel stations were not opened for businesses, with vehicular movements grounded in the South East region of the country.