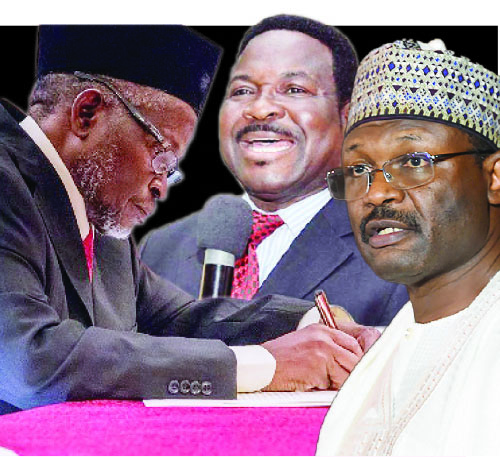 Worried by the danger multiple court orders pose to future elections, the Independent National Electoral Commission (INEC) recently called on the leadership of the judiciary and that of the Nigeria Bar Association (NBA) to intervene in curbing multiple orders and judgments by courts of coordinate jurisdiction on election matters.

INEC had made reference to the  November 6  Anambra State governorship poll, saying that the legion of  orders and judgments could erode its powers, compromise its independence and affect the timelines of the 2023 general elections.

The electoral commission, making its case through the National Commissioner and Chairman, Information and Voter Education Committee, Festus Okoye, raised the alarm at the implementation meeting of the Voter Education and Publicity Department in Awka, Anambra State.

Okoye pleaded that the leaderships of the bar association and the judiciary wade into this descent to forum shopping and the multiplicity of orders and judgments from courts of coordinate jurisdiction.

“This is urgent, it is imperative and cannot be carried over to the 2023 general elections,” he asserted.

In frustration, INEC said that the situation was becoming increasingly hard for court orders and judgments to be obeyed because of the antics of aspirants and candidates.

According to Okoye, “the commission has variously and consistently complained at the frequency and consistency with which courts of coordinate jurisdiction in different jurisdictions all over Nigeria assumed jurisdiction and delivered judgments as well as issued orders with far-reaching implications on the conduct of the Anambra State governorship election.

“Some of the orders have the tendency of eroding the powers of the commission and compromising its independence, powers, and timelines for the conduct of the upcoming election.”

There have also been situations where INEC had contended that certain courts lacked jurisdiction to entertain certain suits or to halt the collation process of an election, thereby posing a threat.

Many court cases abound on the issue of multiple orders that have remained a sour grape in the nation’s elections which the Supreme Court had to stamp its authority to resolve.

For instance, the Court of Appeal, Sokoto Division had to set aside the verdict of the Zamfara High Court, allowing the APC to field candidates in the 2019 election.

A Zamfara State High Court recognised the APC primaries that produced governorship, state and National Assembly candidates after series of multiple judgments and ordered INEC to accept the party’s candidates for the elections.

Dissatisfied with the state High Court decision, the appellants, Senator Kabiru Marafa and 129 others through their counsel, Chief Mike Ozekhome, SAN, approached the Appeal Court and challenged the decision on the grounds that the state High Court lacked jurisdiction to entertain the suit, among others.

It was a case that the Supreme Court in March 2019 had to intervene as it nullified the elections of all the candidates of the APC in that elections.

Delivering the unanimous judgment of the five-man panel led by the then acting Chief Justice of Nigeria, Justice Tanko Muhammad, the apex court declared the first runners-up in the 2019 general elections in the state as the winners of all the positions earlier declared to have been won by the APC and its candidates.

Justice Paul Galinje, who read the lead judgment, upheld the decision of the Sokoto Division of the Court of Appeal to the effect that the APC did not conduct any valid primary election and as such had no candidate for any of the elections in the state.

In giving its ruling, the judges agreed that the judgment should serve as a “bitter lesson” for political parties as they ought to follow legitimate guidelines and rules.

“Domestic affairs of political party activities must act within the confines of the law in dealing with party members and elections,” they said.

Recall also that on February 8, 2019, the Supreme Court nullified a ruling of the Court of Appeal which allowed the All Progressives Congress to field candidates in Rivers State in the general elections.

In the decision, the court said that the appellate court failed to invoke relevant sections of the law in voiding the decision of the Federal High Court barring the party from participating in elections in the state.

A faction of the APC in the state had challenged the decision of the high court at the Court of Appeal.

The court questioned the basis upon which the Appeal Court reached its ruling and set the decision aside while upholding the ruling of the high court.

With the judgment, Rivers State APC candidates lost the opportunity of participating in the National Assembly election that was held on February 16 as well as the governorship and state House of Assembly elections on March 2.

The case of Bayelsa State is also another sore point.After multiple court orders from lower to the high court, up to the Appeal Court, it was the Supreme Court that finally laid the case to rest when it finally sacked the APC governor-elect, David Lyon barely 24 hours to his inauguration.

It was a five-member panel of the apex court led by Justice Mary Odili that nullified the election of Lyon on the grounds that the deputy, Biobarakuma Degi Eremienyo presented false information in aid of his qualification for the November 2019 governorship election in the state.

Indeed, the loss that APC has suffered at various court decisions, according to the spokesman of Conference of United Political Parties (CUPP), Ikenga Ugochinyere, “serves the party right,” stressing that “gradually the house of political injustice APC built will collapse on their head.”

Tanimu Inuwa, SAN, INEC’s lawyer, told Sunday Sun that the issue of multiple courts orders of coordinate jurisdiction are one that should be looked into and properly addressed by the judiciary as some politicians have abused the process even when the suit is grossly lacking in merit.

Most legal experts who spoke with Sunday Sun are of the view that INEC is on the right track in its present advocacy to bring in the judiciary, as well as intervention by the NBA to arrest the ugly trend.

Constitutional lawyer and President, Voters Awareness Initiative (VAI),  Wale Ogunade, captured the position of the lawyers when he told Sunday Sun that the issue of multiple court orders should be checkmated by the judiciary if the nation’s democracy, particularly its elections should be nurtured to grow.

He said that he was already embarking on such campaign as the issue will become a threat to the 2023 general elections.

Ogunade said that it has become necessary that the federal high court should be given the mandate to handle all election issues.

But this he said must be pushed through the National Assembly to be incorporated into the new Electoral Act that President Buhari will bequeath to the country.

Ogunade said:“Court of coordinate jurisdiction is supposed to give judgment that will be in the same order, the ratio of that judgment must be in line not in conflict.

“The judgment should not be one that is singing discordant tunes like that of the Court of Appeal. So in that regards, it spells doom for democracy, it spells doom for consistency, for reliability which the rule of law and legal precedents are based upon.

“To that extent,  it means that such is causing trouble as well as causing stress on the judicial system and particularly for INEC.

“I think it will be good to let all election matters go to the federal high court rather than state high court so that the judgment comes together as one.

“A situation where a state high court in Akure, Lokoja, or Enugu will say one thing another court of coordinate jurisdiction will counter it is not good for the nascent democracy.

“I think INEC should go through the National Assembly, as part of the issues in the new Electoral Act to push that all matters relating to elections conducted by INEC must go to the federal high court.

“In my own capacity and for our organisation, we are already promoting it because this issue of multiple court orders is a huge threat to our elections. We will make it an advocacy issue because what is happening to a large extent doesn’t stand the rule of law”.

Social critic and legal expert, Femi Aborishade, told Sunday Sun that the complaint by INEC is unfortunate although well placed.

According to him, “the complaint of the INEC is unfortunately well placed. The phenomenon of multiple and contradictory court judgments is really a case for concern.

“This is because INEC would be put in a situation to choose which judgment to obey and which to disobey.

“But the call on the NBA by the INEC appears to me to be misplaced. The NBA is not in a position to dictate to the Bench”.