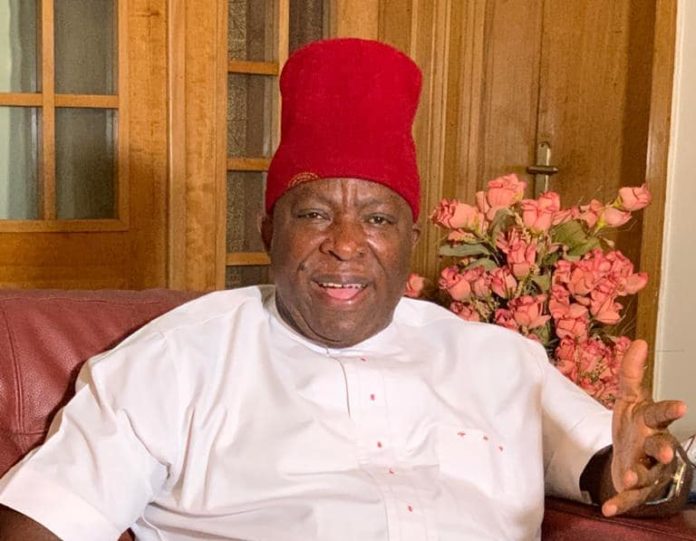 Former National Chairman of the All Progressives Grand Alliance (APGA), Chief Victor Umeh, has admitted being under immense pressure from people of diverse backgrounds and groups asking him to contest and return to the senate for the 2023 general election.

Umeh had a brief stint of 17 months in the National Assembly when he represented Anambra Central District in the Senate after fighting all the legal battles spanning two and half years that trailed the conduct of another election for the senate seat of Anambra Central after the Appeal court nullified the 2015 election of the senatorial seat and ordered for a rerun.

But speaking to reporters over the weekend, Umeh confirmed that pressure is mounting on him to put his hat into the ring for 2023.

“I’m under immense pressure. There are lots of calls, clarion calls, both from Igbos in Diaspora and here coming to ask me to go back to the Senate and each time I encounter people urging me to go back to the National Assembly, I become humbled that the 17 months I was at the Senate of the Federal Republic of Nigeria gave our people hope. It shows that what I did for them was the type of representation they wanted and that’s why they are calling me to go back but you know this is politics. I’m listening to them and I’m doing my calculations and will reply to them at the appropriate time.” He said.

It would be recalled that that groups like the Anambra Progressive Youth Initiatives (APYI), APGA Promoters Assembly (APA), Movement For Good Governance and Conscience (MGGC), Igbo Political Voice (IPV), Anambra Students Union Government’s (SUGs) Forum have been among those who had called on Umeh to contest for the Anambra Central Senatorial seat.

Leaders of the groups in a statement made available to journalists stated that Umeh was a strong voice for Anambra and South East in the Senate, within the 17 months he was in the red chamber.

They said, “This is a clarion call on our people that in the next election, we must cast our votes for people like Senator Victor Umeh with determination, dedication and commitment to developing Nigeria.

“First it was IPAC (Inter-Party Advisory Council) that called on him to run, then Anambra Central stakeholders have resolved compel him to run, and we are also joining the call.”

According to the groups, they are convinced that Umeh was taking note of the calls, and he is expected to answer the calls at the appropriate time.