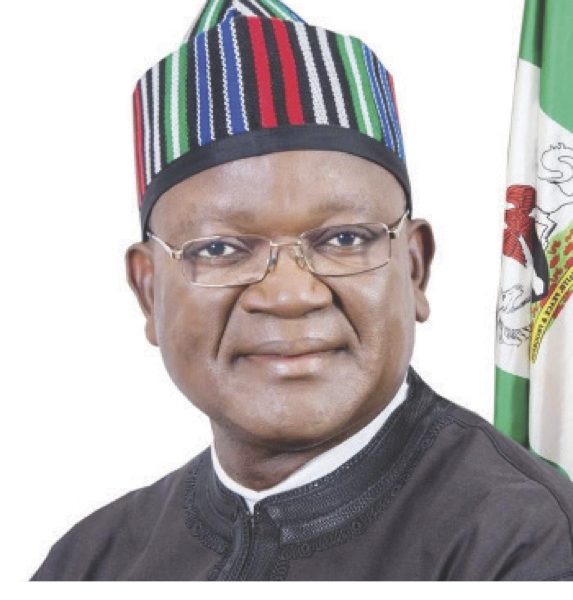 Benue State Governor, Samuel Ortom has said that at over 60 years of age, he is no more afraid to die. He said

even if he dies now, his family will have no cause to fight over his property because he has already written his will.

The governor who blamed the Federal Government for the increasing spate of insecurity in the country, warned prominent Nigerians who should speak out but have been keeping quiet to have a rethink and save the country from the current conundrum.

He spoke on various issues.

What would you say is the major challenge confronting the state right now?

The challenge we have today is that of security. I told the press that more than 1.5 million Benue people today are IDPs. This is in addition to the over 15,000 refugees from Cameroon that we are habouring here because of the crisis in Cameroon. That is the challenge that we have. The Victim Support Program (VSP) were here to see how they can support us to rehabilitate and support our IDPs and whatever they can do to help our people go back to their communities. The Fulani terrorists, when I call Fulani terrorists, they don’t like me calling them that. It is deliberate when I call them that because no other ethnic group is attacking us other than the Fulani terrorists.

We know that we have our local challenge here in Benue State; armed robbery, kidnapping of sort, that the Fulani taught our people. It is not in our culture to be kidnapping people but they came and taught us and so, some bad eggs joined them and they collaborate with them to create hardship for our people. But we are fighting them; local crisis and some sort of land dispute crisis, all these ones are local things that we have lived with. But this one; Fulani coming from Niger, Mauritania and other places to take over our land and make us slaves, sponsored by their people is what we stand against. And I remain committed to this because we have no other land than Benue State and I am a governor elected to provide good governance to the people.

And I remain committed to doing this. And my allegiance is to the Benue people not to any power in Abuja or elsewhere. I have no links with those people. Those people did not elect me, the people of Benue State did. As far as I am concerned, I have the constitutional leverage to protect the people. That is what I am doing and I have no regrets or apology to anyone.

Can you honestly say that the Benue’s grazing law has actually achieved it’s goal?

I restrict myself to Benue State, I am not talking about other states. Any other state that wants to use what we are doing here, it’s fine. Like the prohibition of open grazing law which we enacted in 2017, I am very excited and happy and I’m always willing to give to any state that wants to use our law as a model. We are excited with the vision that God gave us and today, the entire country, if not all, more than 70 percent of the entire country has embraced ranching as the global best practice.

And they are taking after us. And it is so gladdening that some of the states that took the law as a model even provided stiffer punishments to offenders, and that led us to amend our own laws because we were charging N2000 for any cattle that is arrested in Benue State. But we saw that when other states made their own laws, they charged N70,000, N60,000, 50,000. So, we also quickly amended our laws. So, any cow that comes to Benue State now and we arrest, you pay N50,000 before it is released to you. And then, we give you a grace period of seven days, and within that seven days, everyday, you pay additional N20,000 if you don’t come to reclaim it immediately. After that seven days, the law permits us to auction those cows.

But the Fulani are not happy about this grazing law especially as they have a feeling that it is targeted at them?

The law has been tested. We were taken to court and we defeated them because it does not conflict with the provisions of the constitution of the Federal Republic of Nigeria.

You just mentioned a while ago that Benue is at the moment, grappling with a humanitarian burden of catering for over 1.5million IDPs who have been in camps since 2018 till date. How has it been, catering for this group of people so far?

The Victims Support Program (VSF) were here yesterday and I insisted that they should go to the places where these people who are affected are and they did. I learnt that when they got to Gbajimba IDP camp, a woman had an emergency to deliver a baby right in that camp. And the leader of the VSP delegation saw the situation and started weeping. The truth is that those people in those IDP camps could have been you or me seated here enjoying in luxurious apartments with air conditioner or fan, riding cars and so on. This is a very sad thing. I feel so sad when I try to make public what is happening in Benue State and people castigate me and insult me. But I remain committed to serving my people. And of course, I was not elected to preside over IDPs and dead people. And if something is beyond me, at least, I can raise alarm for others to come and help me to solve this problem.

How would you describe the insecurity challenge currently plaguing this country?

The problem of insecurity in Nigeria today is man made. The present Federal Government is responsible because I took proactive steps right from 2016 when I came in and I saw this coming. And today I am warning Nigerians, those who are sitting in their comfort zones, I want them to understand. Last week, one of my colleagues in the North East raised an alarm that ISWAP has taken over part of his state and they are gradually coming in. They are deadly and they have the capacity to overrun this country based on what he saw. And I agree with him that if we don’t take time, it will happen. Like I raised alarm earlier about the challenges we have that if we don’t take time, one day, what happened in Afghanistan, God forbid, will happen in Nigeria.

And it appears to me that this leadership wants to surrender Nigeria to the insurgents. Their action and inaction have proven to me that they are working with the insurgents. That’s the truth. For us here in Benue State, we trust in God and we are looking into God to help us and we are quite committed to ensure that we do the right thing.  We remain committed to the provisions of the constitution of the Federal Republic of Nigeria and we fight for equity, fairness and justice.

And I have always challenged anyone who is in doubt of our administration ensuring fairness, equity and justice for the people of Benue State to raise alarm and to confront us. If your ideas are superior to ours, we are willing to concede and work with yours because we want things to be right with our people. We want to promote the wellbeing of our people. And that’s why our administration is tagged the Collective Vision for a new Benue. Collective Vision in the sense that we want everybody to be part of what we are doing. We do not claim monopoly of knowledge and ideas.

Talking about the issue of insecurity, it seems some of you saw far ahead?

If the FG had heeded to my advice and counsel, we won’t be where we are today because I saw it coming. The whole thing about what this Fulani people are saying is the meeting they held in Yola in 2006 when I wasn’t even governor yet. And they said that they will make Nigeria to be their country. They said they have been roaming about from Senegal to Mali and other places and that because they have no country to call their own, they have now decided to make Nigeria their country and then make other people to become their slaves and I said I can’t be a slave to anyone. I better not live. That is why all these killings they did, I have written my will.

But, are you not afraid for your life with the way and manner in which you have been speaking truth to power?

Me, I’m not afraid of anybody. If I die now, my family will not be fighting because of what I have. I have stated what I want.

And those people who are keeping quiet about what is happening in Nigeria, I want to tell them that they have children. Yes, because silence is consent. So, Nigerians must resist the evil that is happening. Me, I have played my part and I promised myself not to be intimidated by anyone. I’m over 60 years. God has given me enough. God has been so gracious to me and I appreciate Him. So, nobody should think that him or her will cage Samuel Ortom in this life. But I believe that the God that I serve will surely protect me as He has been doing. Several attempts have been made to eliminate me, to assassinate me but God has protected me. When I told people that a 60 year old ran for one and a half kilometer, some people said it’s not possible. Come to my farm and I will take you round and you will see.