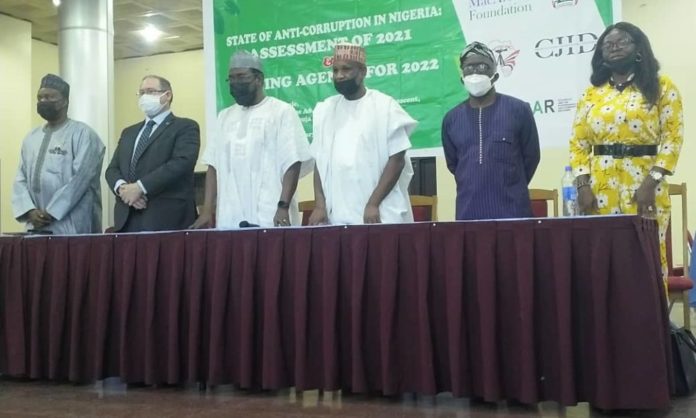 Advocacy group, Human and Environmental Development Agenda (HEDA Resource Centre), has called on stakeholders, particularly the state actors to scale up efforts in tackling illicit financial flow and other forms of corruption in Nigeria.

Chairman of the group, Mr. Olanrewaju Suraju, made the call while speaking at the 26th Anti-Corruption Situation Room (ACSR) organised by HEDA Resource Centre in Abuja.

According to Suraju, the fight against corruption should be seen as a fundamental objective and culture of the leadership at all levels. He said Nigeria’s Anti-Corruption fight has been a failure because it has been left for the President and his Vice alone.

“Nigeria’s Anti-Corruption fight in my rating is that of a flipflop where you have some of the Anti-corruption agencies making efforts and the supervisory office or ministry undermining or even compromising their efforts. Going forward, it has to be a collective effort. The President and the Vice President must actually do better than they are doing because they were voted into office.

“The political parties must also show that they are serious in the fight against corruption by ensuring that the state governors also start the process of fighting corruption in their states; it’s a constitutional provision that every state or organ – the Judiciary, Legislative and even the Executive offices must abolish corruption,” he said.

He accused the Federal Government of abandoning the fight against corruption adding that the Ministry of Justice has deliberately frustrated many corruption cases in the courts through the filing of what they call Nolle Prosequi, which means the government is not willing to prosecute them anymore.

Falana said, “The Ministry of Justice has not prosecuted one corruption case since 2015. The president must be told this. On the contrary, some of the cases are deliberately destroyed by the ministry through what they call Nolle Prosequi.

“That is, if somebody has stolen N20billion an application would be filed in the court by the Attorney General saying we are not willing to prosecute. The use of this must stop if we want to fight corruption, let everyone go to court and convince the court that he has no case to answer.“