the All Progressives Congress (APC) perfects preparation for its presidential primary, Ebonyi State governor and one of the top contnder for the party’s ticket, Dave Umahi, has outlined some salient things he would do if elected President.

Fielding questions from visiting members of the Nigerian Guild of Editors (NGE), he promised to encourage the creation of state and community policing as measures to improve the nation’s security as well of fight corruption without sparing any offender.

He charged APC delegates to the presidential primary to shift focus to the younger generation who have acquitted themselves in their previous stations.

Umahi said the country’s politics should move from sharing money to creating wealth, as Nigeria’s economy needs to be buoyant for the improved welfare of the people.

On the problem in the South East, he reiterated his earlier position that the Indigenous People of Biafra (IPOB) has become a nemesis for the region.

He said that at a time when he and other Igbo leaders are pushing for political solution to agitation in South East, IPOB has not created the environment to make this possible.

“There is no gain in sit-at-home and no gain in killing ourselves,” he said, insisting that those who kill and cause mayhem in the South East are not outsiders but persons from the region.

Governor Umahi said that he would complete all ongoing projects in the state before the expiration of his tenure next year; assuring that the airport project in the state will be completed by end of August.

“By end of August this year, we should be expecting the first flight at Ebonyi airport,” he said. 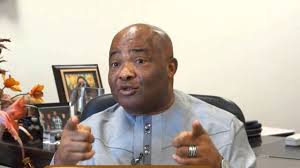