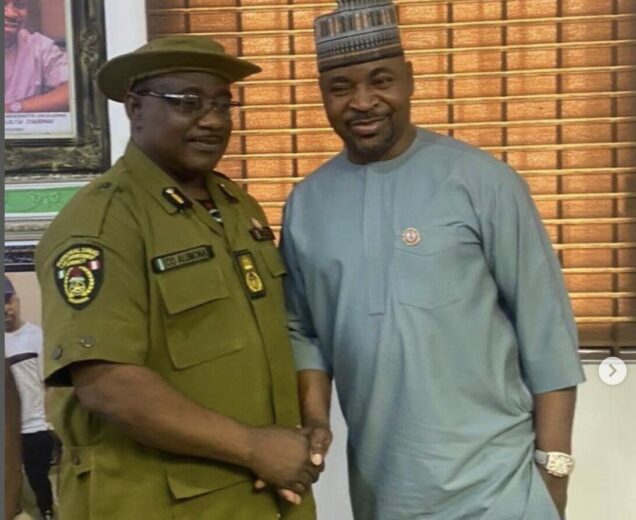 The Lagos State chairman of the National Union of Road Transport Worker (NURTW), Musiliu Akinsanya a.k.a MC Oluomo is now an ambassador of the NDLEA in its war against drug abuse(WADA).

Oluomo was decorated with the title Thursday when the NDLEA Lagos commander, Mr Callys Alumona visited him, along with other senior managers.

The decoration signifies that the NURTW chairman is an ambassador of anti-illicit drug crusade. MC Oluomo, 2nd right with the NDLEA Lagos team

The visit reinforced NDLEA’s partnership with the NURTW, to tackle illicit drugs across Lagos state.

Alumona said the War Against Drug Abuse (WADA) and illicit trafficking would be more effective through the collaboration.

“The NURTW is critical in the war because they are service contractors, who provide transportation for human beings, goods and services in the country.

“The union must conduct proper check on all loads in their vehicles before embarking on any trip.

“These merchants of illicit drugs mostly use vehicles to transport the illicit goods across the country and even beyond,” he said.

He said the agency had carefully monitored the lifestyle of the union chairman and was surprised to discover that he is a man that doesn’t smoke nor drink alcohol.

He said his team and colleagues were surprised that despite all they have heard about Mc-Oluomo, he is a decent man that does not indulge in substance abuse nor encourage the use.

Commander Alumona urged the union members to emulate their chairman by being decent, stop taking harmful substance and other dangerous drugs.

The spokesperson said that he is aware that the union cooperates with NDLEA, but would like the cooperation and relationship to continue in respect of tackling illicit drugs.

In his response, Akinsanya promised to continue to sensitise stakeholders in the transportation circle about the danger of conveying such illicit goods and services.

“No member will do such again to make quick money, knowing that when the law catches up with the person the end is not good.

“Such persons will go to jail and the vehicle will be forfeited to the government,” he said.