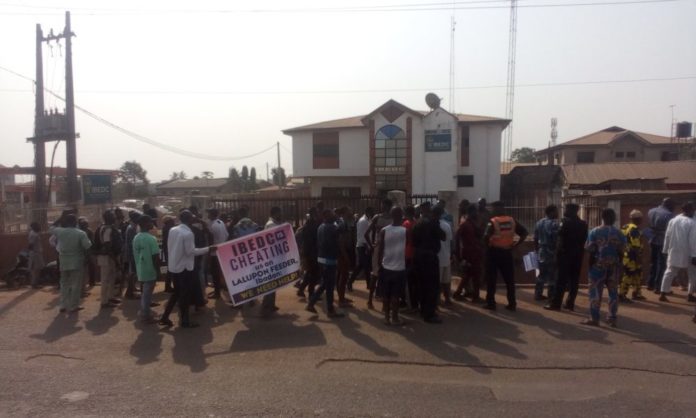 The blockage of the entrance gate, according to the residents, was due to erratic supply of electricity by IBEDC.

The protesters lamented that IBEDC has been exploiting them by supplying few hours of electricity in a month and issuing outrageous estimated bills to them.

Spokesman for the protesting residents, Mr. Kunle Aworinde, explained that the communities were protesting against erratic supply of electricity, non-supply of prepaid meters and issuance of outrageous estimated bills.

Aworinde added that the protest became necessary due to the failure of IBEDC to listen and attend to their demands.

He explained that residents of the protesting communities have been experiencing erratic supply of electricity for years.

“We are protesting against erratic supply of electricity in our communities.

“They are billing us outrageously. They are supplying us little electricity and they are bringing outrageous bills.

“We demanded for prepaid meters but they are not giving us.

Oyo State Coordinator, Campaign for Democracy and Workers’ Rights, Comrade Abiodun Bamigboye, while speaking, described privatization of the power sector as a fraud.

“What we are saying is that, the power sector has failed under privatisation.

“They promised us that once the power sector is privatized, we will be having stable electricity, but, this is not so. Few days ago, we heard that one of the major shareholders in IBEDC is indebted to a bank and AMCON has taken over the company. That means privatization of the power sector is a fraud.”

But, IBEDC Regional Communication Manager, Oyo Region, Mr. Frank Williams, while reacting, however, said that the company was aware of the protest.

He said the company is already addressing the problem.

Williams in a telephone conversation with DAILY POST on Tuesday, said, “Yes. We are aware of the protest. We are addressing the problem.

“We are planing to meet the people.

“They are our good customers. We are currently working to address the problem.”