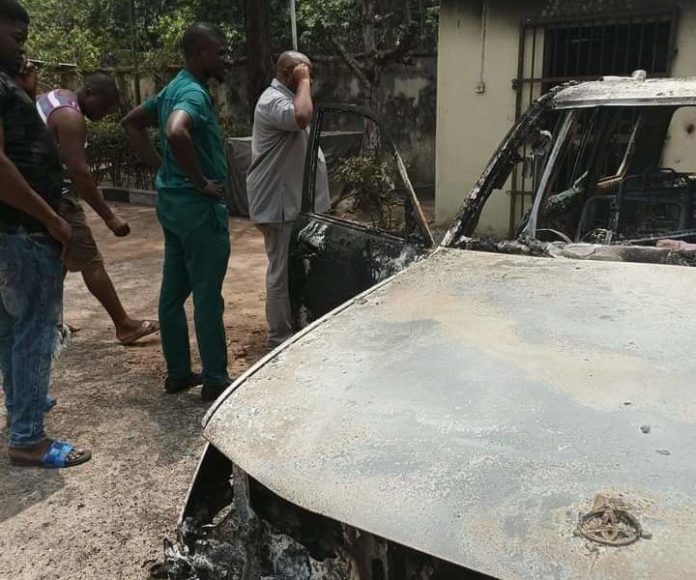 Residential building of the former member that represented Bende Federal Constituency of Abia State at the House of Representatives, Hon Nnenna Ukeje-Elendu was on Monday, burnt by unidentified hoodlums in Alayi, Bende Local Government Area of the State.

Confirming the incident, the Deputy Chairman of Bende Local Government Area of Abia, Promise Uzoma Okoro, revealed that the hoodlums invaded the residential house in the early hour of Tuesday, 1st, March, 2022, burning down vehicles and other valuable properties in the building.

“Around 2am on Tuesday, 1st March 2022, they invaded the home of Hon Nnenna Elendu Ukeje in Alayi, Bende LGA, and burnt it down, including vehicles and other valuable properties.

“The Nigerian Army, DSS and Police have taken the on-the-spot assessment of what happened at the home of the ex-federal lawmaker. We await the outcome of the security investigation and the threat that was directly issued by one Mr. Frank Ejike on Hon Nnenna Ukeje-Elendu,” he said.

However, the ex-federal legislator, Nnenna Ukeje Elendu could not be reached for response as of the time of this report.

Meanwhile, the Member, representing Bende federal Constituency of Abia State at the National Assembly and Spokesman of the House of Representatives, Hon Benjamin Kalu, has frowned at the act and sympathized with the family of Hon Nnenna Ukeje Elendu.

Kalu, while reacting in a statement on Friday, called on the security agencies to investigate the dastardly act.

“Security investigations will reveal next line of action”, the federal lawmaker stated.

Also reacting, Abia chieftain, Chief James Okereke Anyaogu, frowned at such dastardly act and charged the security agencies to conduct a thorough investigation in order to unravel the perpetrators of the evil act.

He maintained that arson, incendiarism, and other deliberate acts of violent destruction of properties have no place in the 21st century Abia State.

On his part, the Minority Leader and Member, representing Bende North Constituency in Abia State House of Assembly, Hon Chijioke Chukwu, condemned in strong terms, the wicked act on an illustrious daughter of Bende, as such was not in the character of the people of Bende.

The Abia lawmaker called that a thorough investigation be carried out, to ensure that the perpetrators of such heinous crime were made to face the law.