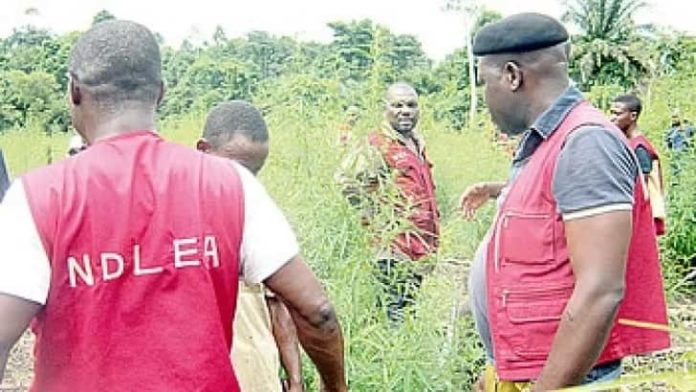 The National Drug Law Enforcement Agency (NDLEA), has arrested six persons in Abuja for selling drug cookies and noodles during a raid at a relaxation centre, popularly called garden.

In another operation, operatives of the agency intercepted a United Kingdom and Saudi-bound cocaine concealed in synthetic hair.

The raid in Abuja followed credible intelligence, operatives raided the garden at Wuse Zone 5 behind Shoprite, where a lady Rachael Famiyesun, 29, who deals in drug cookies was arrested along with her salesgirl, Stella Sunday, 20. Beside the cookies, they were also caught selling bottles of black currant drink popularly called Zobo prepared with cannabis.

Meanwhile, a statement by the Director of Media and Publicity, Femi Babafemi disclosed that another business operator in the garden, Moses Obi, 30, was also arrested with his salesgirl, Aisha Abdulrahman, 19, for selling indomie noodles prepared with cannabis.

A barman, Ahonye Jonah, 31, who works with the owner of the garden, was equally arrested while one of their customers, 38-year-old Ngozi Justina Emelogu was also picked during the raid on Wednesday January 19.

Two days earlier, officers of the FCT command of the Agency equally raided the Zuba Yam Market, where a drug dealer, Haruna Hassan was arrested with 19.3kg cannabis.

Meanwhile, attempts by drug traffickers to export 1.53 kilograms of cocaine hidden inside hair cream to London, and another 880 grams of cocaine concealed inside synthetic hair to Jeddah, Saudi Arabia as well as 3 grams of cocaine and 5grms of cannabis to Cyprus packed inside locally made shoes through two major courier companies in Lagos have been foiled by narcotic officers attached to the firms.

In Edo state, operatives on Tuesday 18th Jan. intercepted a Toyota Camry car with Reg. No. FKJ 897 DG (LAGOS) loaded with 360.4kg Cannabis sativa heading to Abuja and arrested the driver, Nurudeen Subaru, 42, in Auchi, Etsako West area of the state. The following day, the Edo command officers also evacuated 111kg cannabis stored in a bush at Iruekpen, Esan West LGA while 276 compressed blocks of the same substance weighing 248.4kg were recovered from one Austin Okongwu (a.k.a Igwe), 45, at Agenebode, Etsako East while moving the drug in a Lexus saloon car with reg. no. ABC 583 MJ (ABUJA).

Also on Wednesday 19th Jan., a raid on a drug joint in the Edo state capital, Benin, led to the arrest of three drug dealers: Kelly Ogbebor, 38; Daniel Oviawe, 35, and Kelly Kenmakonam, 29 with different quantities of cocaine and heroin seized from them.

In Plateau state, attempt by 29-year-old Ifeoma Godwin Sade, wife of a drug dealer, Ifeanyi Onyeasi, 34, to swallow 12grams of cocaine found in their house at Agingi, Rukuba road, Jos, during an arrest operation was scuttled by operatives who retrieved the drug from her throat on Sunday 16th Jan. Also recovered from them was a monetary exhibit of Two Hundred and Thirty Four Thousand Six Hundred and Fifty Naira Only (N234, 650).

Different quantities of cannabis, methamphetamine and tramadol were seized from two suspects; Aliyu Abdullahi and Ishaya Emmanuel, when a commercial bus with reg. number GME711YX bringing them from Lagos to Yola, Adamawa state was intercepted along Abuja road by officers of the Plateau state command on Wednesday January 19.

In Adamawa state, on Wednesday 19th Jan. the long arm of the law eventually caught a notorious drug dealer, Adamu Musa who has been on the run for nine months. His 31-year-old elder sister, Mrs. Hannatu Sini had been arrested on 16th April 2021, at Gombi Local Government Area of Adamawa with 14.400kg of cannabis sativa and admitted keeping the exhibit for her younger brother, Adamu Musa who was subsequently placed on the wanted list of the command.

This is even as an ex-convict, Mrs. Modinat Lawal, was arrested in Kano on Wednesday January 19 with 22kg cannabis sativa she brought into Nigeria from Benin Republic. She had earlier been arrested, prosecuted and jailed for the same offence. The Ogun state born trafficker claimed then that her name was Bola.

While commending the officers and men of the FCT, Edo, Plateau, Adamawa, Kano and Directorate of Investigation and General Investigations for the arrests and seizures, Chairman/Chief Executive of NDLEA, Brig. Gen. Mohamed Buba Marwa (Retd) charged them and their counterparts in other commands to remain vigilant and always proactive.