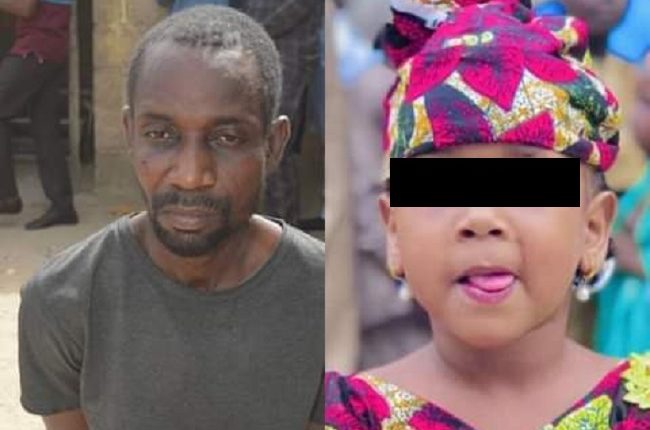 Abubakar, a five-year-old pupil was killed by a teacher of Noble Kids School, Abdulmalik Tanko, in Nasarawa Local Government.

She was kidnapped on December 4, 2021, and murdered two weeks later; her body was dismembered and buried in the school’s premises.

Tanko was arrested by the police while trying to collect the N6million ransom he demanded from late Hanifa’s parents.

Tanko is the proprietor of Noble Kids Comprehensive College, the school Hanifa attended.

They were charged with criminal conspiracy, kidnapping, concealing and keeping in custody a kidnapped person as well as culpable homicide contrary to Sections 97, 274, 277 and 221 of the penal code.

After the charges were read to the suspects, the Chief Magistrate, Mohammed Jibrin ordered that they should be remanded in a correctional centre while the case was adjourned to February 2.

Meanwhile, a mob has razed the school where the girl was reportedly buried. The school is located in Kwanar Dakata community in Nassarawa LGA.

Regardless, the state government has withdrawn the operational certificates of all private schools in the state.

Commissioner of Education, Muhammad Sanusi Kiru, at a press conference, yesterday, said the operators of the private institutions were requested to re-validate their operational certificates.

Daily Sun gathered that the order may not be unconnected to the tragic abduction and murder of five -year- old pupil, Hanifa.

“We are all aware of the ongoing case concerning Hanifa’s death as she was gruesomely murdered by a suspect, called Abdulmalik Tanko who is the proprietor of Noble Kids Academy.

“In view of the sad incidence, especially regarding how she was murdered in her own private school, the State Government has decided to withdraw the certificates of all private schools for revalidation.”

She took to her verified Instagram page, @aishbuhari, to support a call by a popular Kano-based Islamic cleric, Mallam Abdalla Gadon Kaya, who called for Tanko’s public execution.

Mrs. Buhari  wrote in Hausa “Muna Goyon Bayan Hukunchin Malam”, meaning we are in support of your judgment/we are fully behind your position.

She hashtagged Inspector General of Police, Attorney General of the Federation, and Justice for Hanifa.

In a viral video, Gadon Kaya, had charged President Buhari and Kano State Governor, Abdullahi Ganduje, and human rights groups to pick up the case of Hanifa and ensure that justice is served immediately.

According to the cleric, who spoke in Hausa, Tanko’s life was not better than that of Hanifa’s, as such he should be executed publicly.

“Therefore, he should be killed just the way he murdered the little girl. And this should be done openly for everyone to see. Let it serve as a deterrent to others.”

Umar Farouq, in a statement, signed by the Permanent Secretary, Bashir Nura Alkali, assured Nigerians that the perpetrators must face justice.

She prayed for Allah to accept the soul of the departed and grant the parents the fortitude to bear the irreparable loss.

The minister applauded the decision of the Kano State Government on to withdraw the licenses of the two schools named in the tragedy, and the constitution of a ministerial committee to ensure justice.