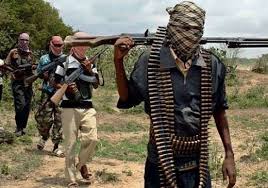 Gunmen on Thursday afternoon allegedly stormed a settlement called Ungwar Makeri, Mokoro Zankariya of Idon ward in Kajuru local government area of Kaduna state and abducted 15 persons, but freed three of them as 12 others were forced into the forest.

A credible source in the area hinted that the well-armed invaders numbering about 100 crept into the community at about 1:00 pm, requesting drinking water from the villagers under the pretence that they were not in the area to arm anyone.

On Tuesday, 16, February, 22 persons were kidnapped and four were critically injured one of them later died when marauding invaders attacked Idon Hanya, about 15 kilometres away from where 15 other persons were abducted on Thursday.

“The kidnappers rejected the N10 million ransom raised by the community to secure the freedom of the 22 persons earlier kidnapped in Idon Hanya. While we are still on that, they struck again yesterday”, a source said on February 16 kidnapping incident.

On Thursday’s incident, a credible source said “they came in broad daylight, well-armed and pleaded with the villagers to help them with water to drink that they won’t harm them.

“After the villagers gave them water, the kidnappers, who were mainly of a particular tribe went into a conversation with their tribal men in the settlement and before one could know what was happening, they started shooting sporadically into the air and kidnapped 15 persons (men and women) in the process.

“But on their way, they released 4 persons and went with 11 others. They told the released four persons to go and look for money and except phone calls from them to discuss where the ransom would be brought to”, the source said.

The Supervisory Councilor of Admin, Finance and Health, Kajuru Local Government area of Kaduna State, said the council has been reporting the issue to the higher authority and also holding security meetings with security persons within its reach.

As of the time of filing this report, both the Kaduna State Police Command and Ministry of Internal Security and Home Affairs we’re yet to make a known official statement on this development.