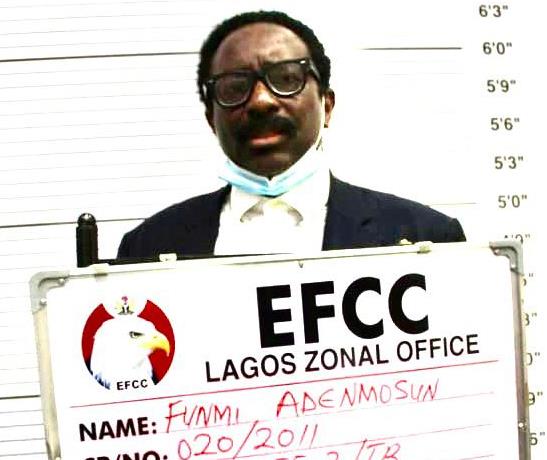 Lagos businessman Funmi Ademosun, who is being prosecuted for an alleged N26.6bn investment fraud has been sent to the Nigerian Correctional Services, NCoS, Ikoyi, Lagos.

Justice Daniel Osiagor of the Federal High Court sitting in Ikoyi, Lagos made the order, following Ademosun’s inability to perfect his bail conditions.

The Lagos Zonal Command of the Economic and Financial Crimes Commission, EFCC, had, on Friday, January 21, 2022, arraigned Ademosun on a 10-count charge bordering on conspiracy and money laundering to the tune of N26.6 billion.

He was arraigned alongside two companies, Home Trust Savings and Loan Limited, and Rare Properties and Development Limited.

One of the counts reads: “That you, FUNMI ADEMOSUN and HOME TRUST SAVINGS and LOAN LIMITED, and RARE PROPERTIES AND DEVELOPMENT LIMITED, sometime in 2007 in Lagos, within the jurisdiction of this Honourable Court, conspired among yourselves to convert the total sum of N26.6 billion, which sum you reasonably ought to have known form part of proceeds of fraudulent conversion of proceeds of private placement raised from the public in the name of Investment & Allied Assurance Plc and you thereby committed an offence contrary to Section 18(a) of the Money Laundering Prohibition Act 2011 as amended, and punishable under Section 15(2) of the same Act.”

Another count reads: “That you, FUNMI ADEMOSUN and HOME TRUST SAVINGS AND LOAN LIMITED, on or about the 8th day of November 2007 in Lagos, within the jurisdiction of this Honourable Court, indirectly transferred the sum of N450,000,000.00( Four Hundred and Fifty Million Naira) to Rare Properties and Development Limited , which sum you reasonably ought to have known form part of the proceeds of fraudulent conversion of the funds raised from the subscribers to the private placement conducted in the name of Investment & Allied Assurance Plc and you thereby committed an offence contrary to Section 15(2) (b) of the Money Laundering Prohibition Act, 2011 as amended, and punishable under Section 15(2) of the same Act.”

He pleaded not guilty to the charge when it was read to him.

In view of his plea, the prosecution counsel, Rotimi Oyedepo, had asked for a trial date and also prayed the Court to remand the defendant in the NCoS.

However, counsel to the defendant, Wale Adesokan, SAN, informed the court that a bail application dated January 13, 2022 had been filed and served on the prosecution.

He therefore urged the Court to admit the defendant to bail, assuring that “he will always attend to his case.”

Consequently, Justice Osiagor granted the defendant bail in the sum of N250m, with two sureties.

One of the sureties must be a Grade Level 15 officer either in the Federal or State Ministry, while the other must be a blood relation of the defendant.

While adjourning the case till March 3, 2022, the Judge had further directed that the defendant be remanded in the EFCC custody pending the perfection of his bail conditions.

However, at today’s sitting, Ademosun, through his counsel, Wale Adesokan, SAN, prayed the court to change his remand in the EFCC custody to Ikoyi Correctional Centre pending the perfection of his bail conditions.

Justice Osiagor granted his prayer and remanded him in the Ikoyi Correctional Centre.

The prosecution counsel, Sulaiman Sulaiman, told the court that the verification of documents presented by the sureties had not yet been concluded.

He also informed the court that he was ready to commence trial and that one of his witnesses was in court.

Justice Osiagor stopped the EFCC from continuing with the verification of the documents submitted by the sureties on the grounds that it had taken too long.

The Judge, who also observed that the prosecution had imposed conditions that were not in the original order made by the court, ordered the court to carry out the verification exercise.

Thereafter, the prosecution called its first witness, Segun Adesomoju, a Compliance Officer with First City Monument Bank Ltd (FCMB), who told the court that his bank received a letter from the EFCC requesting account details of the defendants.

However, when the prosecution sought to tender some of the account statements, Adesokan objected to their admissibility.

In view of this, Sulaiman urged the court to adjourn the case to enable him “to do what is needed.”

The case has been adjourned till next week for continuation of trial.