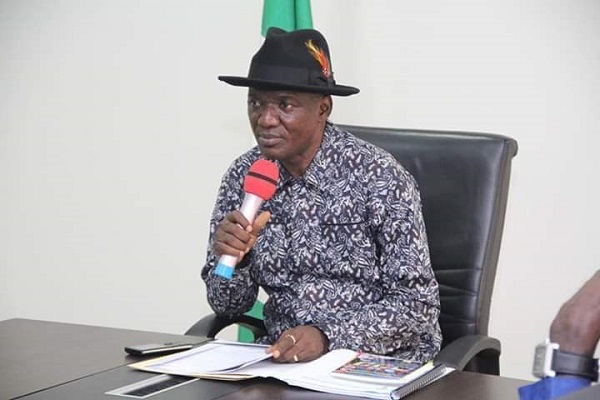 The Bayelsa State Government has set up a special monitoring team on the pricing and distribution of petroleum products in the state.

The special team is made up of the Bayelsa State Petroleum Taskforce (BSPT), the Bayelsa Field Office of the Nigerian Upstream Petroleum Regulatory Commission (NUPRC), and the Independent Petroleum Marketers Association of Nigeria (IPMAN).

The team also has the Nigerian Security and Civil Defence Corps (NSCDC), the Department of State Services (DSS), as well as the Petroleum Products Retail Outlets Owners Association of Nigeria (PETROAN) as members.

Bayelsa deputy governor, Senator Lawrence Ewhrudjakpo, who inaugurated the team during a critical stakeholders meeting at the Government House explained that government was taking every necessary steps to end the scarcity of premium motor spirit (PMS) in the state as soon as possible.

Senator Ewhrudjakpo charged the team to monitor the activities of all the petrol filling stations in the state and ensure that none of them sells above N230, pending when supply sufficiency is restored.

The Deputy Governor further directed the team to enforce compliance with government’s directive that no filling station should sell more than 25 litres to individual buyers in jerry cans until normalcy is restored in fuel supply.

Senator Ewhrudjakpo, who lamented that Bayelsa has the least allocation of petrol in the country from the NNPC, pointed out that making Bayelsa to pay the same amount with other states for fuel subsidy amounts to robbing Peter to pay Paul.

He therefore urged the Federal Government to stop the injustice by ensuring that each state pays for fuel subsidy based on the volume of petrol consumed or number of trucks allocated to it every month.

On the issue of absence of fuel depots which badly affects the fuel supply chain in the state, the Deputy Governor said the government would look at the possibility of establishing at least one deputy through a public private partnership initiative.

Earlier, the Operations Controller of the Nigerian Upstream Petroleum Regulatory Commission, Bayelsa Field office, Mr. Ogbe Nicholas, urged the public not to panic, assuring that there would be normal fuel supply soon as there is enough PMS now at the loading jetties.

Also speaking, the Chairman of the Bayelsa State Petroleum Taskforce, Mr. Richman Samuel, said the taskforce had been working round the clock alongside other stakeholders, including the NUPRC and the oil marketers, to ensure that the situation was brought under control.

Mr Samuel disclosed that through effective negotiation, fuel price in the wake of the current scarcity was brought down from N300 to N230 per litre in the state and appealed to the marketers to maintain the negotiated price.

On his part, the state Chairman of PETROAN, Mr Dukumor Taremi West, while assuring that marketers would not take undue advantage of petrol consumers in the state, stressed the need for relevant agencies to query the whereabouts of the two truckloads of PMS allocated to the NNPC Floating Station at Nembe.