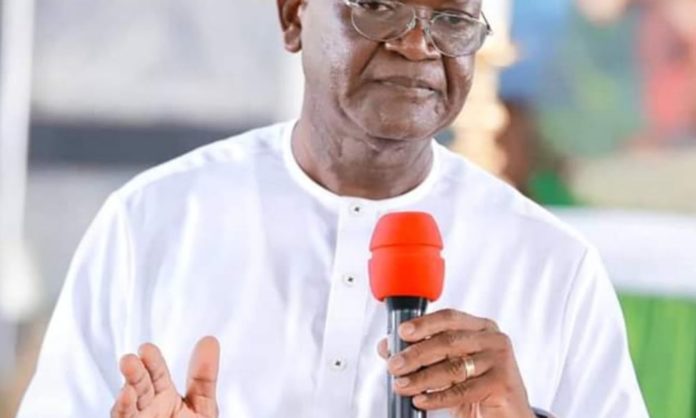 The Coalition of Southern and Middle Belt Youth Leaders Assembly, COSMBYLA, has called on security agencies in Benue State to ensure that the killers of Governor Samuel Ortom’s relatives are apprehended without delay.

DAILY POST recalls that three kinsmen of Governor Ortom, were gunned down by armed men suspected to be Fulani herdsmen on Saturday.

It was gathered that the incident occured when the gunmen who were equipped with sophisticated weapons laid an ambush and blocked the Lordye- Gbajimba road in Guma Local Government Area of the state.

Reacting, a statement issued and made available to newsmen by the President General of COSMBYLA, Goodluck Egwu Ibem, urged the troops of Operation Whirl Stroke to intensify efforts in keeping the state free of all criminal activities.

COSMBYLA, an umbrella body of all the youth groups in the South East, South South, South West and Middle Belt regions also commended the proactive measure of the state governor in collaboration with the troops in rescuing 8 kidnapped victims on Saturday.

The statement reads, “We call on the Operation Whirl Stroke, OPWS, to move into action immediately to apprehend those criminals that killed 3 persons on Saturday evening along Lordy – Gbajimba road in Guma Local Government Area of Benue state.

“The feat achieved in rescuing the eight kidnap victims in the state, is commendable, but we urge them to put in more efforts to flush out these criminal elements from the state.

“We commiserate with the state governor, Dr. Samuel Ortom, the people of Guma Local Government Area and the entire good people of Benue state over the death of their loved ones murdered by Fulani terrorists in their own ancestral homes.

“We commend His Excellency Governor Samuel Ortom for providing necessary logistics and support needed for the security of lives and properties in the state. It takes a man with a good heart and a man that has the interest of his people at heart to stand firmly behind his people defending their course and interest at all times.”