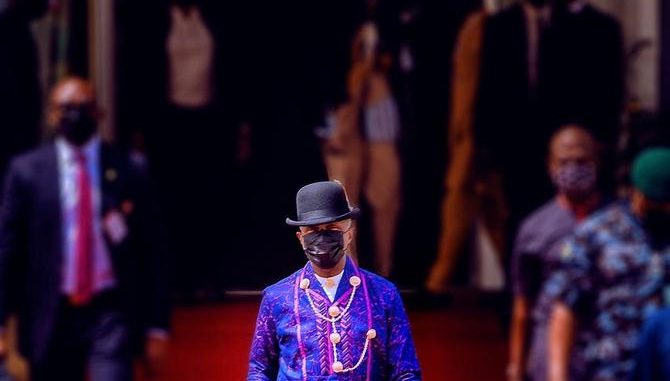 Vice President Yemi Osinbajo on Saturday in Angiama, Southern Ijaw Local Government, assured Bayelsans that the Federal Government has not forgotten the state.

Osinbajo who brought greetings to Bayelsans from President Muhammadu Buhari was in the state to flag off the Southern Ijaw link bridge.

The Bridge was conceptualised in 1962 and has remained on the drawing board with successive administrations in the country failing to construct it until the former governor, Henry Seriake Dickson began its construction.

Osinbajo participated in the historic drive on the Yenagoa-Oporoma-Ukubie road, which construction has reached Angiama.

The Vice President commended Governor Diri for continuing projects that predated his administration adding that the 36km Yenagoa-Oporoma-Ukubie road was significant as it will improve the economy of the people and reduce the incidence of sea piracy.

He noted that the partnership between the federal and state governments was working as evidenced in the refund of money spent by the state government on federal roads, assuring that the Federal Government will continue to support the state to enable it to meet its developmental aspirations.

According to him rural communities in Southern Ijaw were hosts to the nation’s oil and gas wealth and therefore deserved developmental projects such as the historic road.

The nation’s number two man said no inclusive prosperity can thrive without linking communities by road and charged the people of Southern Ijaw to take ownership of the project.

He also called on the people of the state to support the Governor Diri administration to enable it to deliver on its mandate.

“Let me thank my brother, Governor Diri, for inviting me to be part of the second-anniversary celebrations and the traditional rulers for the title conferred on me.

“I also bring you warm greetings from President (Muhammadu)Buhari.

“I am, of course, very excited to join you for this project. Driving through the road, I appreciate the wonderful gift that nature has bestowed on the state.

“There will be no inclusive prosperity without linking communities by road. So this project is very important. We must commend our dear brother, Governor Diri and his team for continuing with this project that has been on the drawing board for over 60 years.

“The partnership between the federal and state government is working as evidenced in the refund of money used by the state for federal roads. We are confident that what your administration has started will be completed at the highest quality.

“I assure you of the support of the Federal Government and that you have not been forgotten. Once more, I congratulate Governor Diri and the beneficiary communities.”

In his remarks, Governor Douye Diri described the flag off of the link bridge as significant to the people of Southern Ijaw Local Government Area given the fact that it has been on the drawing board for over 60 years.