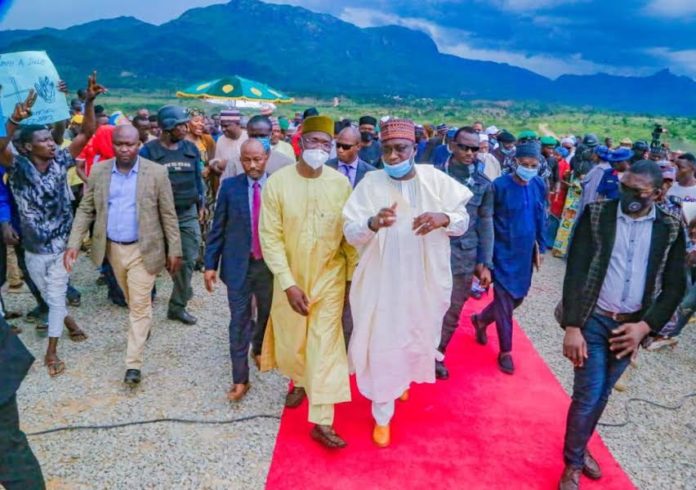 The federal government flagged off the construction for the completion of Farin-Ruwa Hydropower Multipurpose Dam, in the Wamba Local Government Area of Nasarawa State on Saturday.

Speaking at the ceremony in Wamba LGA, the Minister of Water Resources, Malam Suleiman Adamu, disclosed that the project has a completion period of 24 months in the contract signed, adding that the project was originally initiated and started by Nasarawa State Government in 2004 to generate 20,000 hydropower electricity to boost socio-economic development of the state.

He explained that the implementation of the projects suffered a setback due to paucity of funds, stressing that the state government solicited the intervention and take over by the Federal Government in order to actualise the project.

He said in receiving the state government request, the Federal Ministry of Water Resources wrote to President Muhammadu Buhari and he graciously approved the takeover and completion of the project in October 19, 2018.

He further explained that the President had also approved the expansion of the project to includes a regional water scheme and construction of irrigation infrastructures of 2000 hectares for dry season farming to serve the people of the area.

He applauded the Nasarawa State Government for initiating the project and provision of necessary logistics for smooth takeover by constructing the access road to the project that originally was supposed to be part of the items to be constructed by the Federal Government.

The Minister assured the people of the state that the Federal Government would ensure that the project is completed within the stipulated period and according to contract specifications.

Malam Suleiman also emphasised that the Buhari administration would remain committed toward the provision of the needed infrastructures that would guarantee the socioeconomic development of the country.

On his part, the Governor Abdullahi Sule of Nasarawa State commended the President and the Minister of Water Resources and the federal government for taken over the hydropower multipurpose dam project.

Sule added that the President has continued to play a fatherly role by approving anything that would lead to peace, progress and development of Nasarawa State since he assumed office as a governor.

The governor also commended Senator Abdullahi Adamu, the first executive governor of the state for initiating the project and also thanked successive administrations for their efforts towards ensuring that the project was completed.

Governor Sule explained that he decided the construct the 15. 5 kilometres access road to ensure a smooth takeover of the project even though it was part of what the FG would do in the area.

The governor said the dam has the capacity to produce 50 megawatts of electricity the would serve the entire state and supply the Federal Capital Territory and beyond.

The governor promised that the people of the area would support and corporate with the contractor to ensure the timely completion of the project.

The programme had in attendance traditional rulers from the area, National and State House of Assembly members from Nasarawa State, Commissioners among other government functionaries.