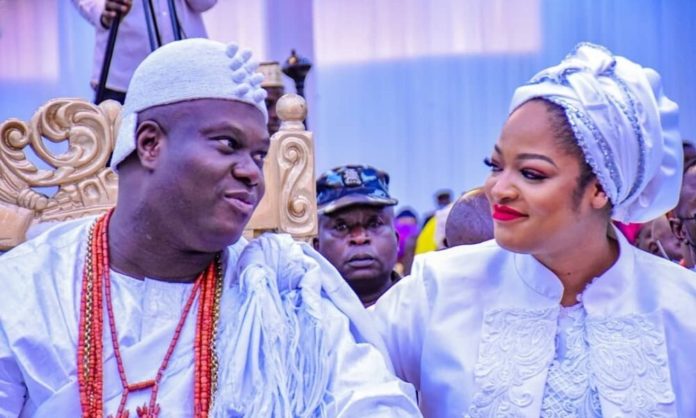 Prophetess Naomi is yet to return to Ile Oodua as the wife of Ooni of Ife, Oba Adeyeye Ogunwusi, after her divorce post on , the Palace told on Thursday.

This is contrary to a broadcast message on and stating that the monarch and his wife had reconciled.

The unconfirmed message claimed elders from both families met in Akure, Ondo State, to which she relocated.

Though sources in the palace confirmed that a reconciliation move was made, they claimed it’s not successful yet.

had reported that some elders from Ile-Ife made a last-minute move to reconcile the Ooni and his estranged wife.

The prophetess had on Thursday, December 23, 2021, in a statement posted on her verified handle, announced an end to her three-year-old marriage with Ooni.

When contacted on Thursday over the message circulating on social media, one of the elders said “both parties have been persuaded to return but no feedback yet from one of them. The last time we heard from them, they said the family will meet and decide.”

When asked which party is yet to give feedback,  the prominent Ife elder replied, “You can’t know.”

One of the aides in the palace added, “No reconciliation yet. We are in the palace. Queen Naomi is not here and her room is still locked.

“We have not been asked to prepare to welcome her.”

When contacted, Ooni’s media aide, Moses Olafare, debunked the report that Prophetess Naomi has returned to the palace.

Asked if the king and his wife have reconciled, he said, “I am not aware.”

“Likewise, Queen Naomi is not in the palace. We are all here with Kabiesi,” he added without giving further details on reconciliation moves.

Following the unconfirmed reconciliation broadcast message, some Nigerians have expressed delight to see the monarch and his wife back.

They expressed their delight on and , where the unconfirmed message was shared Wednesday evening.

Some of them said:

Let this be permanent.  Father Lord, heal this marriage, in Jesus’ name. Amen!!!!

Thank God, I love seeing them together, Olori easy, please.

Thank God for this great news. Next time she will stay away from social media. It is ridiculous for an Olori to go to social media to announce a divorce.

Thank God, our prayer has been answered. God is not happy when a family (husband and wife) falls apart. Rather he rejoices when differences could be handled and from there the family moves forward. So happy for you Olori Naomi.

If this is true, I am so happy for both of them, may the Lord continue to bless their union.

God you are great, those talking nonsense has been put to shame. I’m so happy for the Queen.