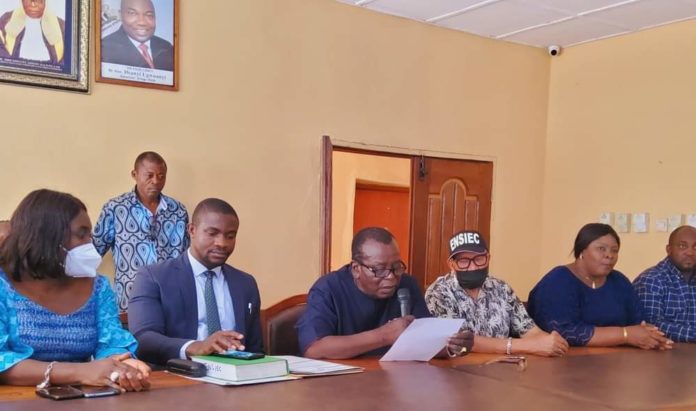 It declared the candidates of the Peoples Democratic Party (PDP) winners of all the 17 chairmanship and 260 councillorship seats in the state.

Announcing the results at the ENSIEC Headquarters in Enugu, the Chairman of the Commission, Dr. Mike Ajogwu disclosed that the candidates of the PDP scored the highest number of votes cast in all the elective positions contested.

Dr. Ajogwu added that the PDP Chairmanship candidates garnered more than one-quarter of the votes cast at the election in each of at least two-thirds of all the wards in their respective council areas.

He stated that the elections were largely peaceful and transparent, and were conducted in accordance with the Local Government Law of Enugu State.

Announcing the result of Nsukka LGA, the ENSIEC Chairman said that the chairmanship candidate of the PDP, Walter Ozioko scored 163,240 votes to defeat his closest opponent, Ngozi Ugwu of the All Progressive Grand Alliance (APGA), who scored 55 votes, and declared Ozioko of PDP as duly elected.

In Aninri LGA, Dr. Ajogwu declared Benneth Ajah of the PDP as elected Chairman of the Council, disclosing that he scored 28,602 votes to defeat the candidates of All Progressives Congress (APC) and All Progressives Grand Alliance (APGA) who scored 7 and 25 votes respectively.

Prior to the announcement of the election results, a coalition of accredited independent observers for the 2022 LG polls in Enugu State, had expressed utmost satisfaction with the conduct of the exercise in the state, describing it as “peaceful, transparent, free and fair”.

Speaking to newsmen after the elections, the National Coordinator, Forum of Civil Society Organizations (FCSOs) in Nigeria, Comrade Fidelis Nweke, maintained that the elections were peaceful, transparent and orderly in the various local government areas they visited.

They commended Governor Ifeanyi Ugwuanyi of Enugu State for his consistency in conducting council elections in the state, describing the governor as “a true democrat who had effectively ended the use of caretaker chairmen in running the affairs of the local government areas in Enugu State”.

Flanked by the National President, Centre for Positive Change and Civic Responsibility, Amb. Chinyere Manukwem and the Executive Director, Centre for Strategy, Ethics and Value, Mr. Romanus Azubuike, the FCSOs National Coordinator, Comrade Nweke, disclosed that the Enugu State Independent Electoral Commission (ENSIEC) improved tremendously on its electoral process adding that the materials and other logistics arrived the polling units on time as their officials displayed a high sense of professionalism.

“I want to say that the elections we observed today were generally peaceful, because you cannot describe any election in Nigeria as being credible, as being fair without first of all being peaceful.

“It was a peaceful election, so we are happy to see this kind of election in Enugu State.

Also speaking, Amb. Manukwem of Centre for Positive Change and Civic Responsibility added that the Enugu State LG elections “went peacefully and there was also a large turnout of voters”, stressing: “We are also impressed with the Enugu people, they came out peacefully and cast their votes”.

On his part, the Executive Director of Centre for Strategy, Ethics and Value, Mr. Azubuike, applauded ENSIEC for its efficiency and transparency of the elections as well as the electoral body’s good relationship with the observers.