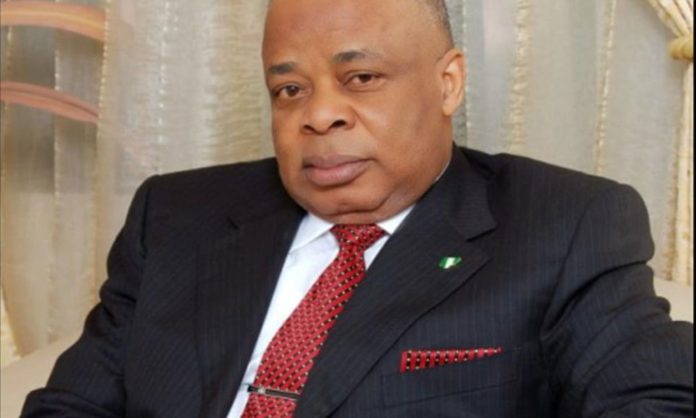 The All Progressives Congress, APC, in Enugu State has accused former Senate President, Chief Ken Nnamani of anti-party tendencies of APC in the day and PDP in the night.

The party spoke in reply to Nnamani’s recent statement that he was committed to putting the APC into winning ways in Enugu State.

Nnamani had during a meeting with the APC ward congress appeal panel in Enugu on Friday said he was ashamed that the party was not winning elections in the State.

He declared that a process of rejigging the party had commenced.

He was quoted to have said, ‘I feel ashamed of being in a party that does not win elections. That is why we want to rejig the party to bring in leaders who will not use it for business.”

However, foundation members of the party in the State believe his alleged “romance with the Peoples Democratic Party, PDP, in the night and shout of APC in the day are anti-democratic tendencies which are at variance with his grandstanding speech and the much talked about rejigging of the APC.”

Speaking with journalists in Enugu on Sunday, Barrister Okey Ezea, popularly known as Ideke Nsukka, pioneer gubernatorial candidate of APC in the State, said that the foundation legacy members of the APC in Enugu State “sincerely agree with the statement credited to Senator Ken Nnamani that, we want to rejig our great party – the APC; however we detest APC in the day and PDP in the night.”

Barrister Ezea, who spoke on behalf of the foundation legacy members of the APC, however, said that they were at a loss “how those who not only have ancient links with PDP, but had benefited immensely from PDP will muster the political will to ditch the party? Or can our big brother stop anti-democratic tendencies? Was he with APC during the last local government election? No, he wasn’t rather allegedly nominated candidates for PDP.

“Accordingly, our grieve and awesome worry is that we have seen new comers shout APC in the day and embed with PDP in the night.”

The party chieftain queried: “Otherwise, how do we reconcile Sen Nnamani anti-democratic tendencies of imposition of Chikwado Chukwunta without due process? Did he as a former lawmaker forget that Dr Nwoye was duly appointed by the National Executive Committee and can only be removed by NEC?

“How do we reconcile his recent endorsement of Chief Chiaka Oha, a prospective candidate of the PDP in a recent event? An event where Sen Nnamani praised Governor Ifeanyi Ugwuanyi to high heavens, the man he claims he wants to dislodge?

“If Oha becomes the candidate of PDP, can Senate Nnamani, who has ancient umbilical ties with Oha and PDP, in all honesty divorce himself from his dear Oha? A Chief going by his own account whom he brokered a deal for with Nuhu Ribadu, the then EFCC, chairman.

“Or can his alleged imposition of Chikwado Chukwunta, hence factionalisation of APC down the line win more votes for APC?

“Or can APC win when Senator Ken Nnamani and co are intimidating the founder landlords of the party in preference to the select few?”

Barrister Ezea on behalf of the foundation legacy members of the APC finally appealed to His Excellency Mai Mala Buni led Caretaker/Extraordinary Convention Planning Committee (CECPC) “to Save the Soul of APC Enugu State before it’s too late.”