Youths of Enugu North Senatorial District under the auspices of ‘Nsukka Youths for Gburugburu’ have commended Governor Ifeanyi Ugwuanyi for his commitment to the wellbeing and development of young people in the district in particular and the state general.

The youth also applauded Gov. Ugwuanyi for the manner he has been carrying them along in his government, stressing that, in the history of the state, Enugu youths have never had the opportunity they have today in governance.

Speaking when a delegation of youth leaders from the six local government areas of Enugu North Senatorial District paid a solidarity visit to Gov. Ugwuanyi at the Government House, Enugu, on Wednesday, the leader of the delegation, Comrade Roy Ifeanyi Ekwueme, told the governor that the visit was also to appreciate him for the peaceful conduct of Peoples Democratic Party (PDP) primary elections in the state.

They expressed confidence in the governor’s wisdom and leadership approach in respect of his political decisions saying: “That is why we organized ourselves to say for everything you have done for us, we are going to come to show you solidarity and support.”

According to him “We also thank you for the opportunity you (Ugwuanyi) gave to the youth that ordinarily wouldn’t have dreamt of being councilors, council chairmen, party candidates, even community leaders. Some of them are here with us. You carried them along and gave them a platform. These are people you raised in Enugu State who never had a father that spoke for them. They never had a name they were banking on. It was you that found them and gave them a name in Enugu State.”

Ekwueme, who is also the President of Nsukka General Assembly, reassured Governor Ugwuanyi that youths of Nsukka zone are resolute in their support and loyalty to him and his administration, stressing that they remain committed to their stance that “where you say we will go, we will go.”

Stressing that Governor Ugwuanyi has “done a lot for us and you are still doing a lot for us”, the leader of the delegation disclosed that Nsukka youths have unanimously endorsed the governor’s senatorial candidature and are working tirelessly towards his landslide victory at the poll in 2023 to represent the district in the 10th Senate.

The youth group went further to thank Gov. Ugwuanyi for his development strides in Enugu State especially his landmark projects such as the massive ongoing projects at the permanent site of ESUT Teaching Hospital and College of Medicine, Igbo Eno, aimed at providing world-class healthcare services to residents of the state in the rural areas and beyond. 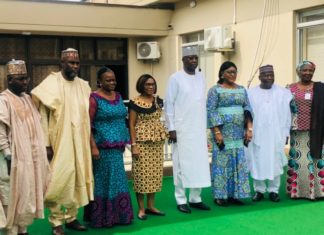