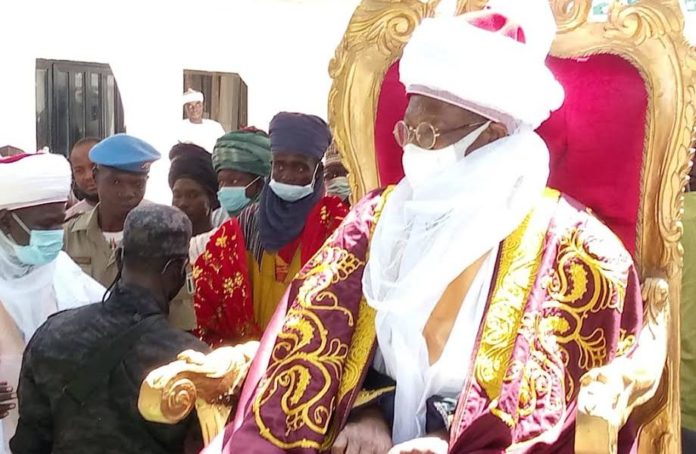 The Emir of Argungu, Alhaji Muhammed Samaila Mera, has conferred the Minister of Information and Culture, Alhaji Lai Muhammed, with the traditional title of the ‘Kakin Kabi’, describing him as the loyal and dedicated Minister under President Muhammad Buhari’s administration.

Mera, who is also the Vice Chairman, Kebbi State Council of Chiefs and Traditional rulers, turbaned the minister with the title in his Palace, Argungu.

Speaking after the official unveiling of the minister as Kakin Kabi, the emir explained that he was chosen due to his past track records, hardworking, loyalty and dedication as the Minister of Information.

According to him, ‘Hon Lai Muhammed, since he becomes the minister, even before then, he has been dedicated to his duty assigned to him and he has continued to demonstrate his loyalty, good character in discharging of his duty as the Minister of the Federal Republic of Nigeria within and outside the shores of the country.

‘It is due to that the Kabi Council of Chiefs and traditional rulers, confer on him the title of Kakin Kabi,’ he said.

The emir, who described the Kakin (Trumpet of Emir) as the symbol of the power of the traditional ruler, noted that with the conferment of the title on the Minister of Information, the people of Kebbi and Nigeria would benefit a lot from his rich experience.

In his acceptance speech, the minister who was accompanied by his wife, Hajia Kudurat Muhammed, friends and relatives, thanked the Emir of Argungu and the people of Kebbi state for recognising his tracks records and conferred him the traditional title in the state.

He said that the state is rich with different cultural festivals such as the Argungu fishing festival, Hutogo, Uhula and Regatta festival in Yauri Emirate.

The minister, who commended President Muhammadu Buhari for giving him the opportunity to serve the country as the minister, adding that, Kebbi state has a lot to offer to Nigeria especially, using the cultural festivals in uniting the country.

The traditional title ceremony was witnessed by the representative of Kebbi state Governor, Alhaji Muhammed Sulaiman Argungu, the Chief of Staff, High Chiefs of Argungu Emirate Council, representatives of Gwandu, Yauri and Zuru Emirates among others personalities that attended the ceremony.