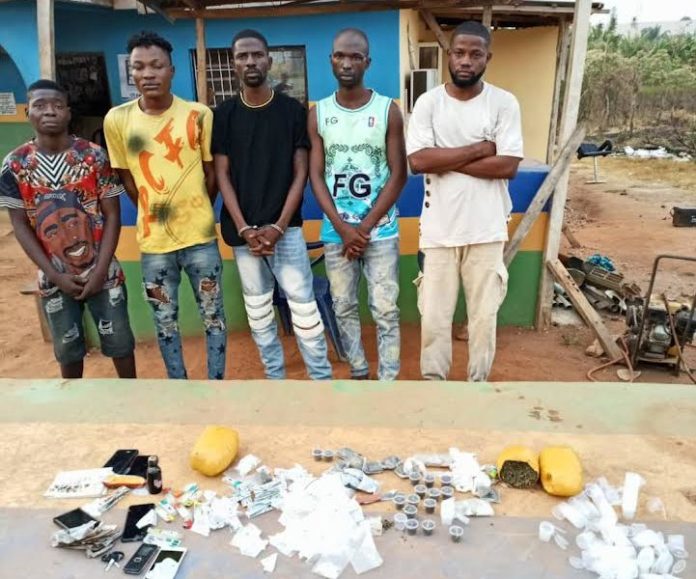 Men of the Ekiti State Police Command have arrested five suspects, who are all males, for alleged cultism and illegal drug dealing in their hotel room in Ikere-Ekiti, the headquarters of Ikere Local Government Area of the state.

The Police Commissioner, Ekiti State Command, Mr Tunde Mobayo, who disclosed this in Ado Ekiti on Saturday, said the suspects were arrested on February 18, 2022, by operatives of the Rapid Response Squad (RRS), after a tip-off.

Mobayo, in a statement signed by the Police Public Relations Officer, Ekiti Command, ASP Sunday Abutu, said the suspects were arrested at Inspirational Hotel, in Ikere Ekiti, at about 02:30 am on Friday.

He disclosed that after being nudged by credible information from one individual in the town, the RRS operatives had swooped on the Suspects and got them rounded up.

The Police boss said: “The Command received a credible tip-off that a group of suspected cultists were sighted in Inspirational Hotel, Ikere-Ekiti.

“Upon the receipt of the information, the operatives of the RRS swung into action and on getting to the hotel, the suspects were rounded up and arrested”

Mobayo added that after their rooms were ransacked, items and substances suspected to be illicit drugs and dangerous weapons were found in their possession.

Mobayo stated that during interrogation, the arrested suspects confessed to being illicit drug dealers.

“I commend the members of the public for their cooperation and support in providing timely and useful information to the police that has led to the arrest of the suspects and other criminal elements in the society.

“I promise that the Command, under my watch, will not relent in its efforts to cripple the activities of criminals in the state,” Mobayo said.