Dowen College; Sylvester Oromoni’s Family Still In Search Of Justice One Year After

Bauchi: Monday Ajasco stabs man to death for refusing to buy beer for him

The Ekiti State House of Assembly said the impeachment of Gboyega Aribisogan who spent only six days as Speaker is irreversible.

Adeoye Aribasoye, the new Chairman of the House Committee on Media and Publicity, spoke on behalf of the lawmakers on Thursday night.

Aribasoye said that contrary to the impression created by the seven Senior Advocates of Nigeria, the removal of Aribisogan had come to stay and that the new Speaker, Mrs. Bunmi Adelugba, shall remain in office.

The seven eminent Ekiti lawyers, who are of Senior Advocates of Nigeria (SAN) rank, led by Aare Afe Babalola, had called for the reinstatement of Aribisogan on the ground that his impeachment was â€œill-conceived, illegal, null and voidâ€.

The senior lawyers also said that Mrs. Bunmi Adelugba, elected as Speaker after Aribisoganâ€™s impeachment should stop parading herself as the new Speaker, saying her purported election was irregular.

However, in a swift reaction, Aribasoye said: â€œThe attention of the Ekiti State House of Assembly has been drawn to a letter circulating on social media written by a combination of Senior Advocates of Nigeria.

â€œThe letter is about the concern of the legal luminaries led by Aare Afe Babalola about the recent change of leadership in the Ekiti State House of Assembly, leading to the impeachment of Rt. Hon Gboyega Aribisogan, who was replaced with Rt. Hon. Olubunmi Adelugba.

â€œWe recognize the right of the legal luminaries, as stakeholders in Ekiti State and we respect their opinions and advice, but that is where it ends.

â€œWe wish to let the reading public know that members of Ekiti State House of Assembly feel a sense of injustice by the one-sided opinion and biased intervention of the legal luminaries, who are also elder statesmen.

â€œThe principle of justice all over the world is that all sides to a conflict must be heard and it is only then that justice can be seen to have been done.â€

According to him, it is unfortunate that the elder statesmen did not hear from the side of the new Speaker and the remaining 16 members, who impeached the former Speaker, Rt. Hon. Gboyega Aribisogan and elected Rt. Hon. Olubunmi Adelugba.

â€œFor the avoidance of doubt, Rt. Hon. Olubunmi Adelugba remains the validly elected Speaker of the Ekiti State House of Assembly and she enjoys the support of an overwhelming majority of the Honourable members, party leadership, and the government of Ekiti State.

â€œTherefore, the advice of the legal luminaries that Rt. Hon. Olubunmi Adelugba, who was duly elected by 17 members should stop parading herself as the Speaker of the Ekiti State House of Assembly, is unwarranted and we believe this is based on wrong information by the impeached Speaker.â€

He said that the House has neither breached any section of the Constitution of the Federal Republic of Nigeria, nor its own Standing Rules concerning the impeachment of Aribisogan, and the election of Adelugba.

Aribasoye further explained that on Monday, Aribisogan was duly served an impeachment notice and was thereafter impeached by two-thirds members of the whole House.

â€œWe, however, wish to remind our legal luminaries that when a serious infraction of the Constitution of the Federal Republic of Nigeria was committed during the PDP administration of Gov. Ayodele Fayose where seven members, impeached the then Speaker, Adewale Omirin, we didnâ€™t see a convergence of legal luminaries condemning the action.

â€œThis same Aribisogan was equally suspended by the fifth Assembly during the tenure of Gov. Fayose, but there was no whimper from our legal luminaries.

â€œWe wish to reinstate that peace has returned to the Ekiti State House of Assembly. since the inordinately ambitious Speaker was impeached and suspended alongside his cohorts.

â€œMrs. Adelugba has presided over parliamentarians and plenaries, with the majority of members present.

â€œShe has announced the appointment of new principal officers and she has constituted all Committees of the House,â€ he said. 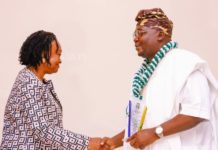 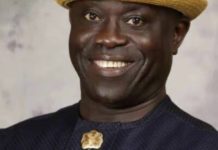 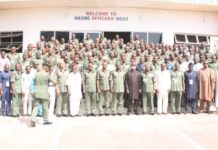 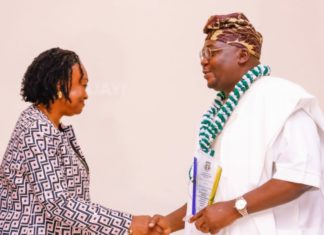