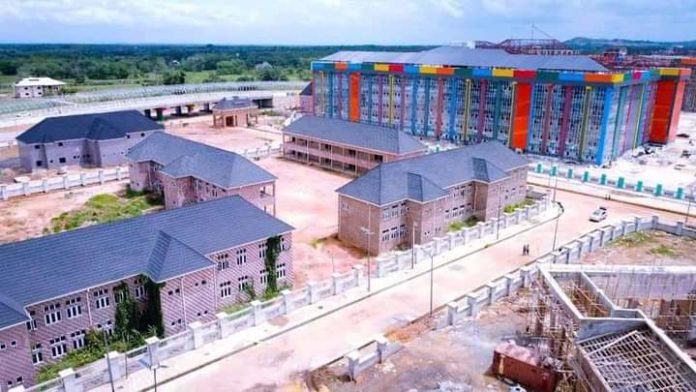 Association of Ebonyi State Indigenes in Diaspora (AESID), has rejected the donation of King David University of Medical Sciences, Uburu, which it described as “Greek offer” by the governor of the state, Dave Nweze Umahi, to the Catholic Church.

The body said if the situation is not properly managed, it could lead to animosity between the Presbyterian Church of Nigeria, who had claimed ownership of the new university and the Catholic Church.

At the Episcopal Ordination and installation of Peter Nworie Chukwu as the 3rd Bishop of the Catholic Diocese of Abakaliki on Thursday, August 19, 2021, Ebonyi State Governor, David Nweze Umahi, announced the handing over of the King David University of Medical Sciences, Uburu to the Catholic Bishops Conference for what he termed “optimum management and academic excellence.”

As reported via a statement made available through his Special Assistant on Media and Publicity, Mr. Francis Nwaze, the Governor declared: “The contributions of the church to the Educational Development of Nigeria is unparalleled and for this, I, on-behalf of the State wish to give the King David University of Medical Sciences Uburu to the Catholic Bishops Conference of Nigeria to own and run.”

Reacting through a statement signed by its President, Paschal Oluchukwu, on Sunday, the Ebonyi indigenes wondered how a governor made such a pronouncement “which is capable of not only pitching the mother church against her sister Presbyterian Church which has been in court challenging the forceful takeover of the said property but also further negate the provisions of our extant Laws, create chaos and confusion and deepen animosity between the Christian faith even as we yet see Ebonyi as a secular State only dominated by the Christian religion.”

According to the statement, in public’s best interest, no law permits a governor to build such a massive edifice with millions of unaccounted public funds and hand same over to a people of a particular faith in a multi-religious society like ours.

“Apart from the severe breaches of the law typified by the non-passage of any Law enabling the donation of the said institution which was built with public funds, unaudited and unaccounted for by the Ebonyi State’s House of Assembly- an ordinarily third arm of government that has been serially amputated and utterly neglected by the Governor, Umahi has by this pronouncement shown that he’s merely a desperate dealer trying to cover-up his suspected dirty tracks by currying the favour of the largest and most populous Catholic Church.

“No one, we repeat, no church or organisation for that matter therefore should accept any such compromised dealings from a Governor like Umahi. For we are certain that his motives on this particular offer are as ulterior as the majority of his dealings with Ebonyi people in his past six year’s on the saddle as Ebonyi Governor,” the statement further read.

“We are aware that Umahi had sent a letter asking for approval to the State’s House of Assembly asking for the State’s takeover and acquisition of the oldest Hospital founded by a Missionary, Dr. John Hitchcock which his lackeys in the said arm of government readily granted without any due diligence or investigation, the head of Information Department and Public Affairs of the Presbyterian Church, Rt. Rev. Nnoke Ibe had in a detailed Press release accused the State Governor of forcefully taking over the hospital for which it still paid rents to the family and village donors of the land upon which it is situated.

“The release, made since July 2020 had asserted without a counter-claim from the Umahi-led government that, ‘The Church is also aware that the Government’s power of eminent domain confers a power to take land it requires for public purposes; but that power is made constitutionally subject to procedures which guarantee the rights, privileges and entitlements of occupiers and holders.”

While condemning the governor’s “insensitive act” further, the statement said: “We haven’t also forgotten that the plan was actually to acquire and build the said institution as the new State’s University medical school. We are also knowledgeable about the fact that the Ebonyi State government recently released an outrageous fee regime of between N1 to N3M as annual School fees for the institution following the approval of it’s courses by the NUC and even announcements for job recruitments. From where and how then can the Catholic community fund, maintain and sustain such academic institution which could become a monumental waste if not properly-funded?

“If truly Umahi loves and wants academic excellence, why has he proposed the above monumental fee regime in a poor state like ours? Why has he also totally neglected the public education sector in Ebonyi without reasonable grants to the existing state-owned Primary, Secondary and especially, tertiary institutions in the State?

“Finally, AESID joins the rest of saner Ebonyians to kindly reject the offer and focus on fulfilling its spiritual and religious goals for the Church even as we wish the newly-ordained Bishop a successful Episcopal reign filled with great wisdom to handle the affairs of the mother church.

“And for Umahi, he should await his days of reckoning with the antitrust agencies for all his lawless actions, misconducts and unaccountability in governance which has made Ebonyi remain the poverty capital of the entire Southern Nigeria.”