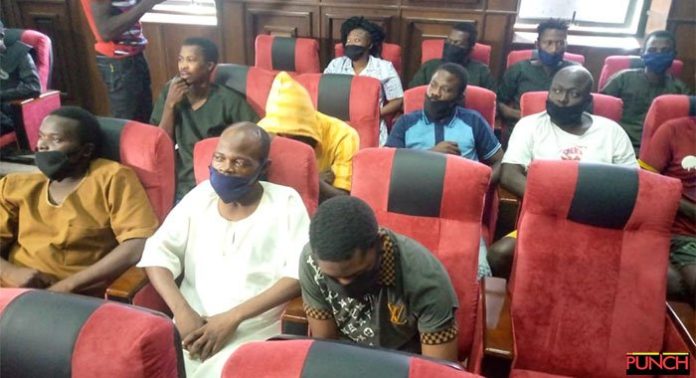 Some of the aides of Yoruba Nation agitator, Sunday Adeyemo, at the Federal High Court, Abuja, on Wednesday. Photo: Olatunji Obasa

The Department of State Services has approached the Court of Appeal in Abuja to revoke the bail earlier granted by the Federal High Court in Abuja to four of the 12 detained aides of embattled Yoruba Nation agitator, Sunday Adeyemo, Sunday PUNCH has learnt.

The DSS expressed strong dissatisfaction against the August 4, 2021 ruling of Justice Obiora Egwuatu of the Federal High Court, Abuja granting bail to all detainees.

The DSS, in the notice of appeal, contended that “the learned judge erred in law and thereby occasioned a miscarriage of justice” when he dismissed the objection filed by the DSS against the bail application of the detainees.

The DSS, therefore, urged the Court of Appeal, “to allow this appeal and set aside the ruling of the lower court delivered on August 4, 2021.”

Our correspondent gathered that the Federal High Court has since issued a summons for compilation and transmission of court records to the appellate court.

Speaking with on Saturday, the detainees’ lawyer, Olajengbesi said his clients, who are still in custody, had already met their bails conditions.

He said he was at the bail office of the court on Tuesday waiting for the judge to sign the release order of his clients but he was told that Justice Egwuatu had travelled out.

He said the he and other members of Igboho’s legal team had been served the DSS appeal but alleged that the secret police was behaving “lawlessly.”

“The DSS is beginning to act lawlessly and not in the interest of the country. When bail has been granted already, the DSS should be concerned about the liberty of the people and not be filing appeal against the bail granted. The DSS is gravitating towards lawlessness,” the detainees’ lawyer said.