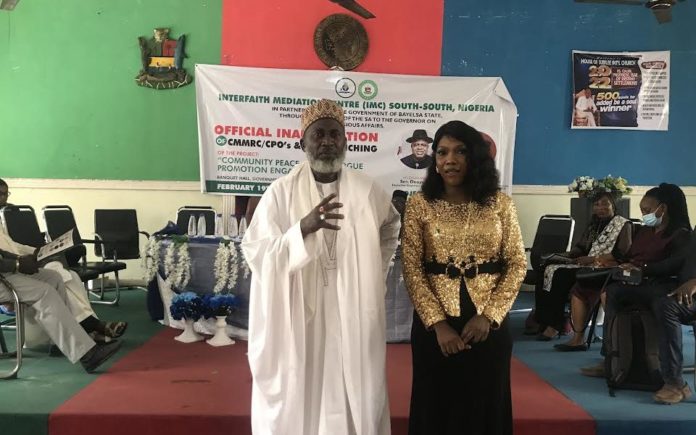 Inadequate advocacy by religious bodies against cultism and violence has been identified as the pivotal factor in the rise of vices in society.

This was the submission of Chief Collins Cocodia, the Political Adviser to Bayelsa Governor at the inauguration of the Conflicts Mitigation and Management Regional Council / Community Peace Observers (CMMRC/CPO), Bayelsa State organised by the Interfaith Mediation Centre (IMC) South-South in conjunction with the Bayelsa State Government.

Cocodia noted that in spite of the rise in the number of worship places across divides there has been a corresponding alarming rise in membership of cult groups and youths which calls for concern.

He urged religious leaders to increase the preaching of peace, love and unity among youths to save future generations.

Cocodia, who was also the chairman of the event, implored religious leaders to focus on preaching against evil while calling for co-existence among the various categories of youths and families.

”The crisis and violence we are witnessing among youths are as a result of disunity and lack of love.

”How did we get to this level despite the increase in religious bodies across the divide? We are witnessing a worrisome increase in the number of cult groups and youths’ involvement in violence. These youths are members of various religious organisations and denominations. I called on religious bodies and their leaders to do more of what they are supposed to do. The religious leaders, parents and traditional rulers should live up to expectations,” he said

Cocodia also called on politicians to stop patronising cult groups during elections declaring that the example of Bayelsa State Governor is enough to tell people that power comes from God.

The Co-executive Director, Interfaith Mediation Centre, Imam Muhammed Nurayn Ashafa said the group came to the state to create a bridge of reconciliation and across the divide of religion, tribes, and denomination in order to achieve peace and in turn encourage development.

According to him the mission also includes introducing an interfaith approach to peace in development and proper security,

“We want to count Bayelsa among the states with an approach that will single it out as a peaceful destination for investments. There is a need to turn Bayelsa into a role model.”

The Interfaith Mediation Centre (IMC) also announced 53 persons listed for the award of Ambassador of Peace including Christian and Muslim leaders in the state, professional and non-governmental organisations including Cocodia, the Nigerian Bar Association (Sagbama Branch), the Starrz Safety Initiative led by Mrs Bekeowei Eyemiere Accrah, the Federation of Women Lawyers (FIDA), Ethanrose Foundation, the Do Foundation, International, the National Agency for the Prohibition of trafficking in Persons (NAPTIP) led by the State Commander, Mrs, Abieyuwa Ikhidero, among others.