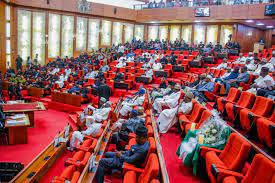 The Senate, on Wednesday, took a major step in ita efforts to arrest Nigeria’s deteriorating road infrastructure as it concurred the Road Roads Bill earlier passed by the House Representatives in December 2019.

The Bill, which was sponsored by the Deputy Minority Leader of the House of Representatives, Toby Okechukwu and Ossai Nicholas in the House, was sponsored in the Senate by the Senate Leader, Yahaya Abubakar for concurrence and passage in line with legislative traditions.

When established, the agency is expected to facilitate Private Sector participation in the development, financing, maintenance, management, and improvement of roads in Nigeria, including contracts for road concession and other forms of Public Private Partnership as well as set guidelines for the working of PPP contracts.

It is to further bear the responsibilities of planning and managing the development of road safety technical designs and standards, and also seek revenue generating opportunities from the asset itself and its management from lease or license or other fees pertaining to non-vehicular road usages such as advertising, cables, masts, etc.

Meanwhile, the complementing bill – Federal Roads Fund (Establishment) Bill – also sponsored by Hon. Okechukwu and Hon. Nicolas in the House of Representatives where it was equally passed in December 2019 is awaiting pending in the Senate in the Senate.

It is recalled that the two Bills were passed by the 8th National Assembly as remedy for the broken-down road infrastructure in Nigeria, but were not assented by President Muhammadu Buhari, who raised some concerns.

They were therefore reintroduced in the current National Assembly. The Senate and House of Representatives have been in war of words over concurrence of Bills even as the worsening state of federal roads in the country has received attention in both Chambers in recent days vide resolutions as lawmakers rued the hardship imposed by the development on Nigerians.