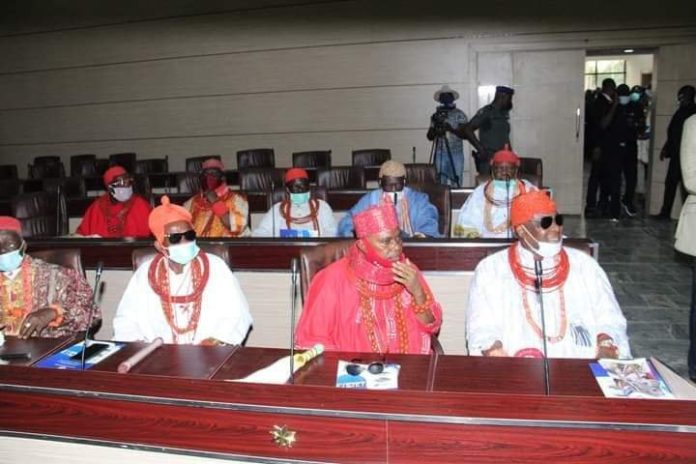 DC-23 with Ighoyota Amori as national chairman, is a lobby group canvassing for the zoning of the governorship seat for the 2023 election to Delta central within the ruling People’s Democratic Party (PDP) in the state.

The group recently released it’s final report of screening of governorship aspirants where it cleared three persons including former Minister of State for Education, Kenneth Gbagi; immediate past Chief of Staff to Governor Ifeanyi Okowa, David Edevbie; and current Speaker of the state House of Assembly, Sheriff Oborevwori.

Speaking at his palace, chairman of the Delta North Traditional Rulers’ Forum, Asagba of Asaba, Obi (Prof.) Chike Edozien, said the cleared aspirants were very qualified to govern the state, and urged stakeholders in Delta central to remain steadfast in their quest for the governorship position.

He spoke during a consultative visit by DC-23 to Delta north traditional rulers with over 35 royal fathers from the zone in attendance.

Prof. Edozien stated that the zoning of the governorship seat on the basis of senatorial districts has not changed since the return of democracy in 1999, noting that the argument of zoning on ethnic basis was not tenable.

“The Governorship zoning system that has been working for us is on senatorial basis. The central has gone, which is Chief James Ibori; Delta South has gone, Dr. Emmanuel Uduaghan; and today our son, Dr. Ifeanyi Okowa is on the saddle.

“When we were going round to canvass for support in 2015 for Delta north, our campaign was based on senatorial district. Today Delta north, Senator Ifeanyi Okowa is now the governor, which by God’s grace his tenure will end in a year time.

“For somebody from Delta north to say he wants to be governor after Senator Ifeanyi Okowa is wrong, not that the person does not have the constitutional right, but is going to be a fruitless effort because the person will end up wasting his money. We Delta northerners know that is our son that is occupying that position now.

“In Anioma Congress, we have the political class, we have the traditional rulers class and the business class. Our political class and business class have not come to us the traditional rulers to say there is a change in the zoning pattern. Even our son, Governor Ifeanyi Okowa has not come to us to say there is a different arrangement apart from the senatorial zoning which we have been using.

“Since they have not come to us to say otherwise, the status quo remains, which means the senatorial district zoning arrangement is what we will still maintain. I therefore call on Urhobo people, which is Delta central to be steadfast and put their house together,” the Asagba said.

National chairman of DC-23, Ighoyota Amori had solicited the support of the Delta North Traditional Rulers, arguing that it was the turn of the Delta Central Senatorial District to produce the next governor.

Amori said Delta central have waited for 16 years, adding that it was only proper to allow them to come in after Governor Ifeanyi Okowa.

He maintained that zoning along ethnic nationality was not practicable, saying that the the state was made up of seven ethnic groups.