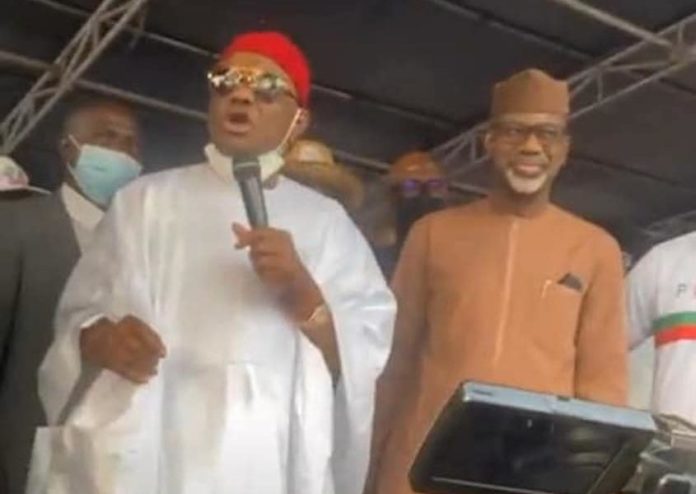 Governor Nyesom Wike of Rivers State has called on the PDP leadership and supporters not to be intimidated by the APC, saying intimidating voters is “part of their game” ahead of the Saturday, February 26 by-election.

Wike, who stormed Calabar about 5:00 pm as a special guest to the state chapter of the party, enjoined the electorate to guide and protect their votes on election day.

According to him, the visit to the state is to show solidarity and support to party members, who he said have been intimidated and persecuted by the APC government.

He said the party leadership is totally committed to delivering in the by-election just as they did in the just-concluded FCT election.

Commending the thousands of party faithful who came out en masse for the rally, he said: “I can go home and feel fulfilled that Cross River is totally a PDP state. When I heard that this rally would not hold I told myself that it is not possible.

“And if this rally did not hold that would have been the end of PDP in the state. Based on that I would support PDP with all my heart. They tried it in Rivers state and I resisted them.

“Whatever Cross River state government can do, PDP can do it better. This turnout shows that people are hungry and ready for a change in 2023.

“I cannot understand why, in an ordinary by-election, we cannot be allowed to hold our campaign rally.

Nobody should be afraid. Go home and mobilise your people and go and defeat APC. We must win APC properly so everybody must come out and vote for PDP. Dont be intimidated by their antics because it is part of their game.”

Presenting the PDP flags to the two candidates, Mike Usibe and Dr Edet Ekeng, Wike said: “We must follow them bumper-to-bumper. Protect your votes because this is the election we are working for. APC must fall in Cross River.”