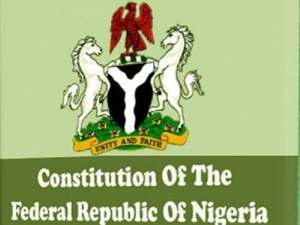 Some leading groups from the South-West, South-East, Middle Belt and Northern parts of the country are singing discordant tunes over some of the recent bills passed by the National Assembly to amend some sections of the 1999 constitution.

Afenifere, Ohanaeze Ndigbo, MBF and AYCF hailed some of the amendment bills, including granting autonomy to the 774 local governments councils Nigeria as well as their rejection of life pension for Senate presidents and Speakers of the House of Representatives. But they claimed the amendments, overall, fell short of the restructuring and true federalism Nigerians wanted.

National Publicity Secretary of Afenifere, Jare Ajayi, said while certain aspects of the amendments passed by the National Assembly appeared nice on paper, they fell short of the desired restructuring to true federalism that Nigerians had been clamouring for.

For instance, he noted that the proposal to reduce the items on the Exclusive Legislative List in favour of states is commendable, but that the amendment only touched on peripheral items rather than on core subjects of true federalism.

Afenifere knocked the National Assembly for not allowing state and local government police, despite the level of insecurity in the country and the failure of a centrally commanded police structure to stem the insecurity. It also condemned the attempt to remove the power to conduct local government elections from the State Independent Electoral Commissions (SIEC).

He admitted that some state governments do manipulate the SIEC to subvert electoral choices in their areas, but said the solution was not in transferring the power to conduct local government elections to the central government.

President of the Middle Belt Forum (MBF), Dr. Pogu Bitrus, said the autonomy for local governments is a good development, and noted that the new amendment will free the local governments from the stranglehold of the state government.

He said: “It will bring the government closer to the people. It will also bring about enjoyable facilities to the grassroots, more so now that we have so much insecurity in the land. The local government with their autonomy can play a role in stabilizing their areas of control. So, it is a good and welcome development.” National Publicity Secretary of Ohanaeze Ndigbo Worldwide, Chief Alex Ogbonnia, said autonomy for local government will mark the beginning of democratic governance in Nigeria. He noted that the cancellation of state/local government joint account will help the local governments work better as a tier of government.

He also commended the lawmakers for turning down the proposal for pension to be paid to former Senate presidents and former Speakers of the House of Representatives.

President of the Arewa Youths Consultative Forum (AYCF), Alhaji Yerima Shettima also commended the passing of local government autonomy. He noted that autonomy for local government councils would allow the ‘commonest’ people be part and parcel of government.

“Again in terms of security, people will feel that they have a stake in it government with autonomy to the local governments because people come from the community,” Shetimma said.

A lawyer and former President of Aka Ikenga, Chief Goddy Uwazurike, believed that a perfect document would one day be attained. He noted that there is the need for arms of government that need to be independent to be truly independent “in word and deed.” He also supported the listing of the power generation, distribution and transmission.

“Let states take care of their energy needs. The capacity for Lagos, Rivers, Delta, Kano and Anambra definitely cannot be at the same level as  in Borno, Katsina, Ebonyi and Ekiti,” Uwazurike said.