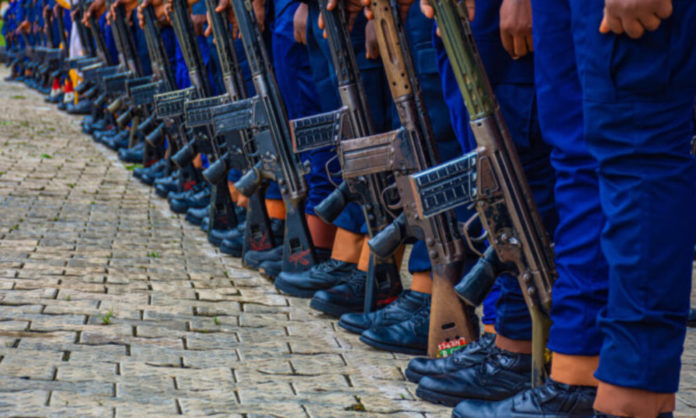 The Guild of Civil Societies and Media Executives for Equity, Justice and Transparency in Nigeria (GOCMFJ) has condemned the proposed scrapping of the Nigerian Security and Civil Defence Corps (NSCDC).

Shina Peller, who is representing Iseyin/Itsiwaju/Kajola/Iwajora Federal Constituency of Oyo State in the House of Representatives, had sponsored the scrapping and merger of the Nigerian Security and Civil Defence Corps (NSCDC) and the Nigeria Police Force (NPF).

Peller had proposed the bill to the House via the National Security and Civil Defence Corps (Repeal and Transition) Bill 2022, and it has passed first reading.

But, GOCMFJ President, Omoba Kenneth and Secretary, James Okoronkwo, in a statement yesterday, argued that the planned scrapping was insensitive especially now the country is experiencing security challenges.

The statement read: “As champions of transparency, good governance and accountability in public service, we condemn in strong terms and in its entirety this proposed bill as it does not trigger constructive debates, conversations and substantive reforms in the best interest of the nation and, as such, should be rejected and jettisoned by the House as it is unnecessary, retrogressive and premature.

“We are, therefore, constrained to issue the following statements, as the bill in question touches the sensitivity, feelings, aspirations and crux of the Nigerian people and the security architecture:

“The core mandate of the NSCDC includes the provision of constant and effective protection of critical national assets, pipelines, interfacing and regulating private security guard companies for local safety and intervening in the management of national and man-made disasters and so many others not mentioned here, as enshrined in the NSCDC (Amendment) Act 2007, Act No. 6, which in itself is very different from the constitutional provisions of the Nigeria Police Force and its mandate as also enshrined in the Constitution.

“The NSCDC which is a paramilitary organization and agency of government is commissioned to provide measures against threat and any form of attack or disaster against the nation and its citizenry as statutorily empowered by Act No. 2 of 2003 as amended by Act 6 of 2007 respectively, which also is different and far apart from the statutory responsibilities of the Nigeria Police Force (NPF).

“Why then the proposed merger or the proposed scrapping of the agency? Nigerians are asking as the present crop of officers and men of the NSCDC are proactive and alive to their day-to-day responsibilities of protecting critical assets spread across the length and breadth of the country.

“Just like in developed nations of the world where you have different security agencies complementing one another in the discharge of the security responsibilities of the said country.

“The lawmaker should be seen to be sponsoring and spearheading debates on how to increase funding for the NSCDC, including institutional capacity building and manpower development, instead of calling for its scrapping and merger so as to enhance their constitutional roles.

“The bill seeking the scrapping or merger of the NSCDC is seen by Nigerians as a course carried too far and the reasons given for it is too pedestrian to be taken seriously by right-thinking Nigerians and, as such, should be rejected wholeheartedly.

“It is very unnecessary, ill-timed and unreasonable to push for and canvass for such a bill at this time the country is going through severe challenges of insecurity as a result of the Boko Haram insurgency and banditry.

“Rather than call for its scrapping or merger as the case may be, each security agency should be left to play their constitutionally assigned roles and complement each other where necessary as provided for in the Constitution of the Federal Republic.

“GOCMEJ calls on the leadership of the House, to jettison the bill forthwith and stop it from wasting taxpayers’ funds, dissipating time, energy and resources on vexed issues that are not important to the safety of lives and property, including the protection of its citizenry at a time when the nation is facing dire consequences of insecurity.

“That the plan by the Honourable member is ill-conceived, irrelevant and unnecessary in today’s scheme of things and will do more harm than good and exacerbate the security challenges the country is facing.

“The role and mandate of the NSCDC is unambiguously clear, which seeks to secure critical national assets, regulate of private security guard companies, pipeline surveillance, training and retraining of security companies, which is very important at this period and very different from the functions and roles of the Nigeria Police especially now that individuals and citizenry are doing all they can to protect themselves and children in schools from kidnappings and banditry.

“At this juncture, we call on the Federal Government to strengthen and professionally equip the NSCDC and increase funding for capacity building and training of its men and officers as well, rather than scrapping or merging the NSCDC which action is retrogressive to the security development of the country.

“As the present headship of the corps is focused, capable and has a blueprint to change the narrative and reposition the NSCDC to meet with international best practices and safeguard critical national assets spread across the country.

“We also call on the House of Representatives to reject the proposed bill in its entirety and call for the stoppage of the obnoxious bill that is detrimental to the collective wellbeing of the security architecture and urge the Honourable member to channel his energy towards other productive endeavours.

“GOCMEJ states categorically and strongly condemns the proposed bill as ill-timed, in bad faith especially when the country is grappling with security challenges, especially now that there are clarion calls for the establishment of state Police, recognition of vigilante groups and peace corps through the Act of the National Assembly and therefore it is utterly retrogressive and a call that every Nigerian should condemn.

“The organization states emphatically that the thinking that the NSCDC and the NPF perform the same functions is misconstrued, untrue, misconceived and unimaginable.

“This is because both agencies of government have their different assigned roles, but complement each other when the need arises like in any other developed societies of the world.

“Therefore, it is not only peculiar to the country. It is in view of this that we call the Federal Government, the leadership of the National Assembly not to listen or give an iota or dissipate energy to the retrogressive bill sponsored in bad faith so that the bill will not see the light of the day.

“It is also critical to state that, while the security of property is extremely important to the economy of the nation as the bulk of the national income and resources comes from oil production, the NSCDC should be empowered, strengthened and professionally equipped to carry on this responsibility and not to be scrapped or merged as canvassed by the Honourable member, so as not to suffer the wrath of Nigerians who are eagerly interested in the outcome of the proposed bill.

“GOCMEJ passes a vote of confidence on the hierarchy of the leadership of the NSCDC for its vision and performance index so far and transformational blueprint in changing the narrative and rebranding the Service like never before.

“It is pertinent to state that, when the leadership of the National Assembly is considering a proposed bill on state police in its amendment processes, the Honourable member is busy from the backdoor, asking for the scrapping and merger of a very viable security organization in the security architecture of the country, instead, of calling for more funding and training to enable it to perform its duties effectively to the nation.

“We, therefore, call on Nigerians, the NASS members and the Federal Government to reject the bill forthwith and stop wasting taxpayers’ funds as it is premature at this time and that we must, first of all, address the issue of insecurity, which is first, foremost and paramount to the lives of Nigerians.”