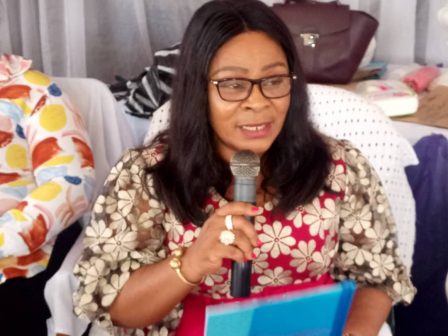 The provost of Federal College of Education (Technical) Asaba, Delta State, Dr Mrs Josephine Anene-Okeakwa, has refuted allegations making the round that she was shielding one Okonta, a lecturer in the institution, who is facing an investigation panel.

The denial came as some members of the State Working Committee of the Delta State Council of Nigeria Union of Journalists (NUJ) led by the council chairman, Comrade Michael Ikeogwu, paid an unscheduled visit to the provost, to ascertain the level of development and other sundry issues at the college.

Anene-Okeakwa, who was flanked by the management staff of the institutions, said that she was shocked over the unverified allegations in the media being sponsored by some aggrieved aspirants in the just concluded cooperative election in the institution.

She said that trouble started after the said Okonta, a chief lecturer in the institution, was petitioned over issues bordering about his entry cadre prior to his obtaining a Master’s Degree and a PhD.

Anene-Okeakwa said ‘the issue is about a petition against a Chief Lecturer in the school, Mr Okonta bordering on entry cadre. The person we are talking about has been studying since he got engaged in College to the effect that he obtained his Master’s Degree and then PhD. All his credentials are in his file, nothing has changed except that the petitioner was insisting that he had 3rd class in his degree at the point of entry. But they never mentioned that he has also gone to upgrade himself.’

According to her, following the petition challenging his entry cadre into the College, she issued a query to Okonta to that effect which he responded to and then set up an investigation panel which had Mr Samuel Ilabor who is the Chairman ACTU as a member.

She said that instead of the Anti Corruption and Transparency Unit (ACTU) to submit their report to her to be minuted to the management and then council, the committee sent a petition directly to ICPC in Abuja against laid down procedures.

‘It was after their report had gone to Abuja, not even Benin which is our zone that they had a rethink and submitted a copy to me, and I minuted it to the management from where it should go to the Council for decision making.

‘I can only deal with matters affecting staff from level 1-9, anything from there and above, it is the Council that handles that. They couldn’t wait for this process, they sent their petition to the media and started dragging my name and picture in their untrue story.

‘I didn’t shield Mr Okonta, even though we know this whole thing is happening because of the cooperative election which didn’t go down well with the other faction. Mr Okonta was the Electoral Committee Chairman and for obvious reasons didn’t play ball as expected.

‘They just want to smear my name in this matter. I feel disappointed that as a result of election matters, they are taking laws into their hands to destroy the name of the organisation where they earn their livelihood, to the effect that they were using fictitious names, one Dr Isitua Ifeanyi Obi to write petitions with phone numbers of a Hausa man and another ignorant staff who is in the Netherlands on sabbaticals,’ she said.

Earlier, the NUJ chairman, Ikeogwu, had expressed concern over the smear campaigns against the College Provost, whom he said had from every available record distinguished herself in terms of inclusive administration, transparency and accountability.

He commended the provost for her developmental strives at the institutions, urging journalists to always verify allegations before going to press.