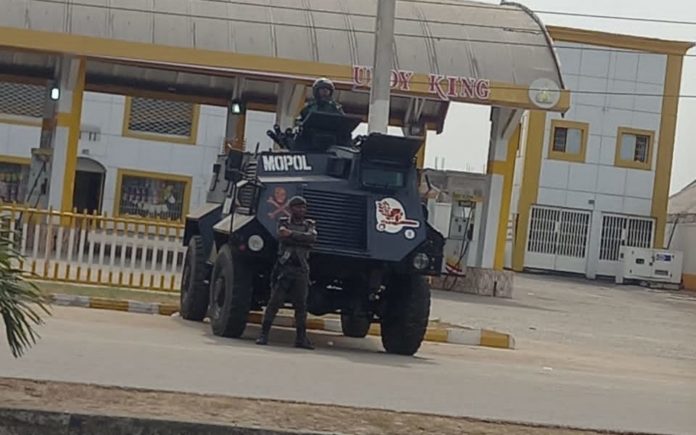 The Peoples Democratic Party (PDP) in Cross River State was on Saturday stopped from launching its flag-off campaign for next weekend’s by-election for Yala/Ogoja Federal Constituency and Akpabuyo State Constituency.

The security agents stopped three governors and two former governors and functionaries from launching the campaign slated for the private Calabar Sports Club, saying the ruling All Progressives Congress (APC) was holding an event some distance away.

Governors Nyesome Wike of Rivers State, Udom Emmanuel of Akwa Ibom and Samuel Ortom of Benue State, as well as two former governors of the state, Donald Duke and Liyel Imoke, were billed to attend the event to support the rally.

Commissioner of Police in the state, Aminu Alhassan, confirmed that he ordered the blockade of the PDP because the youth wing of ruling party APC were holding a massive rally at the UJ Esuene Stadium few distance away.

“I sent the security to avoid breakdown of law and order in the state. Two big parties cannot hold events the same day so that they won’t cause problem.

“So, I had to stop the PDP own and allow APC own. PDP can hold their own tomorrow please,” he said.

“Both applied and he gave them all approval but that the APC Youth Summit has been having their activites and today is the main day.”

Security vehicles and uniformed policemen as well as other details were seen trying to block the entrances of the sports club and turning back members and officials of the party.

No fewer than 100 security operatives, including soldiers, policemen and operatives of the Nigeria Security and Civil Defence Corps (NSCDC) barricaded the rally venue in Calabar.

Over 20 Hiliux vans and one Armoured Personnel Carrier were used for the blockade.

Eyewitnesses said the leader of the team, on arrival, threatened the PDP faithful to vacate or face the wrath of the law.

“The PDP officials resisted, stressing that they were given due approval by thse police.

“But teeming PDP supporters were trooping into the place through the emergency gates while some were seen erecting banners and pasting posters of their various candidates for the by-election and the three expected governors,” one of them said.