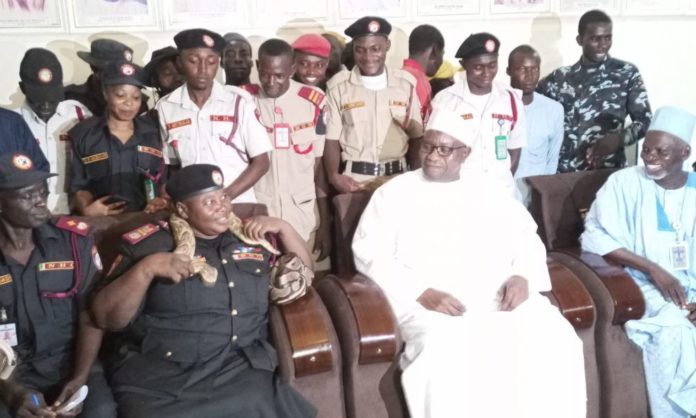 Katsina State Chapter of the Nigeria Hunters Council, NHC, has volunteered to assist the State Government in winning the war against banditry in the State.

Hajiya Ummah Dauda, the Assistant Commandant General (ACG), made the pledge on Thursday, when she led other members of the association on a courtesy call to the office of the Secretary to the State Government, SSG, Mustapha Muhammad Inuwa.

While unveiling their mission to the office of the SSG, ACG Ummah revealed that they are members of the group of warriors who hunt and know the forest and they are ready to sacrifice their lives for the cause.

“As hunters, we know the forest very well and the truth is we are in a better position to help the government in fighting bandits. Besides, our members are well fortified and bullets cannot penetrate us. We are trained warriors, and fighters.

“Our work force in each local government areas are more than a hundred. In some LGAs, we have over one hundred hunters and all of them are warriors.

“Some of our members here single-handedly arrested bandits in the past and handed them to security operatives.

“Sir, with the kind permission of the state government, we are ready to hit the forest and fish out these bandits even right now,” ACG Ummah declared.

However, she used the opportunity to call on the state government to avail them an office space among other needs to make their work effective.

In his remarks, the Secretary to the State Government, Mustapha Inuwa thanked ACG Ummah and her team for volunteering to help the government in the fight against the menace of bandits in the state, noting that security is everybody’s business in the state and that the government is ready to cooperate with all genuine intending persons or group in crippling the menace of bandits in the State.

Mustapha also added that the government would explore the possibility of getting them involved in the ongoing onslaught against hoodlums in the state.