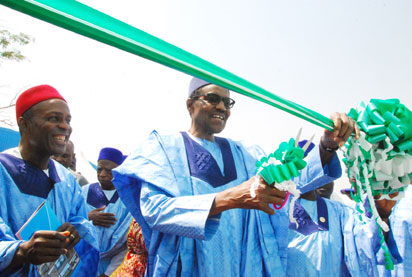 President Muhammadu Buhari is in Nasarawa State for a two day working visit and on his first day on arrival, commissioned Four State Government Projects of Engr. Abdullahi Sule in Lafia the State Capital.

The President commended the Governor for completing projects of his predecessors as well as initiating new ones and urged him not to recent in doing his best for the people.

Governor Abdullahi Sule who took the President round the projects thanked him for the visit and reassured him of the support and respect of the people of Nasarawa State to his government and personality at all times thus appreciated the federal government projects in the state which he said would improved on both social and economic status of the people.

The Governors of Plateau State Simon Bako Lalong, that of Kogi State Yahaya Bello and Kebbi State Atiku Bagudu and Deputy Governors of Benue and Ebonyi States were on ground to support Governor Abdullahi Sule received the President.

Similarly, the Governor of the Central Bank of Nigeria CBN,Minister of Aviation and that of Science and Technology were also around.

From the state front, the three Senators Abdullahi Adamu, Tanko Almakura and Godiya Akwashiki as well as Minister of State Science and Technology Barr. Muhammed Hassan Abdullahi, House of Representative Members and other sons and daughters of the State holding key positions were not left out.

The Nasarawa State Number Three Citizen, the Speaker of the State Assembly Rt. Hon. Ibrahim Balarabe Abdullahi led other members of the House to received the President.

The President also paid Homage to the Emir of Lafia justice Sidi Bage Muhammad (Rtd) in his palace.