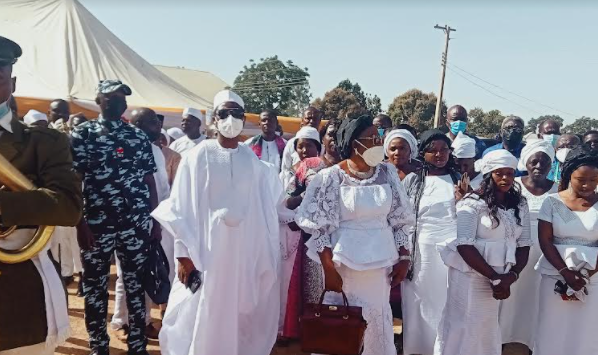 He commiserated with the Governor and good people of Plateau State over the loss of mama and said her demise has created a vacuum.

Buhari who was represented by Minister of Women Affairs, Dame Pauline Tallen appreciated Rev. Pam for taken care of his mother up to the age of 97 and admonished children to take good care of their mothers.

“Mama has raised good and worthy children among them is Rev. Yakubu Pam, Executive Secretary NCPC whom I am happy with his intervention on peace and unity of the country.”

Plateau State Governor and Chairman Northern Governors Forum, Simon Bako Lalong said the demised of Mama has created a a big vacuum that would be difficult to fill.

He said that Mama would be remembered as a devout Christian and community leader who gave her best to the service of God.

Lalong described Rev. Pam as an Ambassador of peace who has never been afraid to go to the war zone to make peace on the interest of Plateau and the unity of Nigeria.

He said his initiative in revamping the NCPC which was gradually going moribund and said Rev. Pam has raised the bar of leadership at the NCPC.

Chairman of the Nigerian Governor Forum and Governor of Ekiti State, Dr. Kayode Fayemi described late Mama Zimi as a virtues women who lived not only for her children but her entire community and Plateau people.

“Mama clearly lived a life of service, we can adjudged from all the testimonies of people who have written tributes about Mama that she was a good woman in all ramifications.

“She did not lived her life for only her children but her community and Plateau State. She has produced children who are changing the narrative of life in the society positively and one of them is Rev. Yakubu Pam.”

He said Mama fought a good fight and was a mentor to many people who have impacted the society positively.

President Christian Association of Nigeria (CAN), Rev. Samson Ayokunle described Late Ngo Zimi Pam as a worthy ambassador of Christ while on earth.

He rejoiced with Rev. Pam because Mama died at a ripe old age and as a Christian who worked tirelessly to lead many to Christ.

Plateau State CAN Chairman, Polycarp Lubo, said death is a necessary end and urged the family to be console for the fact that mama is currently living in a better place.

Deputy Chairman CAN, Northern Nigeria Rev. Bitrus Dodo urged the family to offer prayers of Thanksgiving because of the life mama lived on earth.

He described Rev. Pam as a selfless man who stood for the unity and progress of Nigeria.

Chairman Arewa Consultative Forum, Audu Ogbe described Mama as a woman of honour despite her inability to go to school but impacted the society.

He noted that Rev. Pam who came through the womb of his mother has worked tirelessly for the peace of Plateau State and Nigeria.

Ogbe noted that the Arewa Consultative Forum is working tirelessly to bring peace, unity and tolerance between Christians and Muslims in Northern Nigeria.

Chairman APC Plateau State, Rufus Bature prayed God to grant the family and her associates the fortitude to bear the lost of mama.

Rev. Pam said her mother was his source of strength and knows how to rebuke when his wrong.