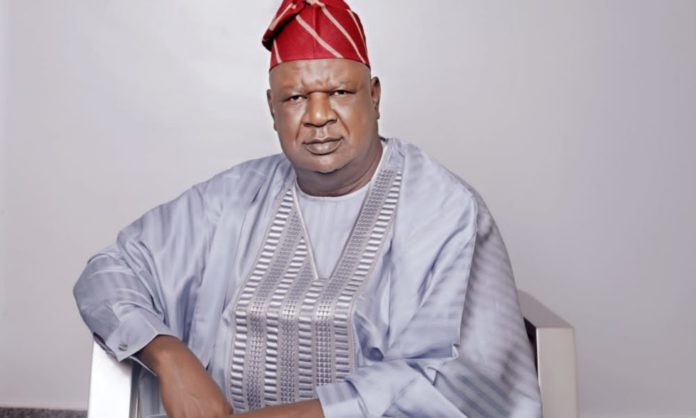 President Muhammadu Buhari and his predecessor, Goodluck Johnathan, as well as other eminent Nigerians, converged on Abuja on Saturday to celebrate former Secretary to Government of the Federation (SGF), Anyim Pius Anyim on the occasion of his 61st birthday.

President Buhari in his speech at the event paid glowing tributes to Anyim, who is also a former Senate President, describing him as a distinguished Nigerian, who puts the country first.

Buhari, who was represented by the SGF. Boss Mustapha, said the massive turnout for the birthday celebration is a testimony of Anyim’s contribution to national development.

According to him, “Senator Pius Anyim is a patriotic Nigerian who always puts his nation first and he is one of stabilising voices we have today in the politics of our country. This he has demonstrated in a number of times, but the one that stands out and still echoes with me was his insistence that elected officers should always stay a single term and he kept to his word by not seeking for re-election to the Senate, after the expiration of his first term as Senator and Senate President in 2003.

“That many Nigerians cutting across various political divides are gathered here today to celebrate you is a glowing testimony of your contributions to the growth of our nation and its political development.”

Mustapha, while speaking in his personal capacity, noted that the experience garnered by the former Senate President, as SGF places him at a vantage position for other offices.

“Let me say on a personal note, as the current and 19th SGF that I have drawn a lot from the wealth of wisdom that has been the source of strength and the endowment that Senator Anyim has brought to the fore of governance in this country…

“And I want to thank you (Anyim), for the wealth of experience and the depth of knowledge that we have. I made bold to say whoever had occupied the Office of the Secretary to the government for four years In an evolving democracy like Nigeria, with diverse contentious issues, is capable and able to occupy any office,” Mustapha stated.

Similarly, Jonathan, who chaired the event, in his speech, noted that the attendance at the ceremony is an indication of the trust Nigerians have in Anyim. The former President stated that he never regretted making Anyim SGF during his tenure.

He said “Today, we are celebrating a young man but you are getting old now. At 61 years, you are no longer very young but you are willing to serve and as somebody who has served at the parliament as a Senate President, at the executive level as the Secretary to the Government of the Federation, it is quite tasking.

“Having served in that position (SGF) for the period, I know he is fully baked and I didn’t receive too many complaints. You know as a President, every day you receive complaints from those who work for you- the ministers, your aides, advisers, assistants and so on. I didn’t receive too many complaints about Anyim Pius Anyim…He is a very hard working young man, committed to serving this nation and I believe if he has the opportunity to serve more, he can do better.”